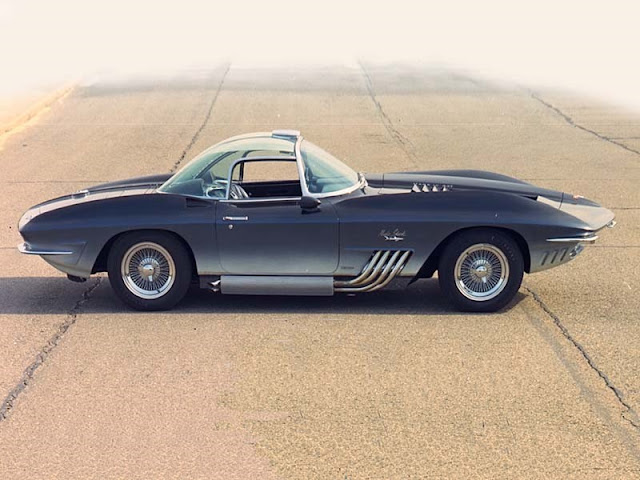 The Chevrolet Corvette Mako Shark 1 \’dream car\’ was one of the most stunning conceits in automotive history. An exotic blend of muscle car styling and supercharged grunt, it paved the way for one of the most spellbinding roadsters ever made. The Corvette Stingray took low-slung chic to another level. A production car had seldom – if ever – looked so good.

A marine mammal provided design inspiration. William Mitchell – GM\’s chief stylist – went fishing, off Florida. His luck was in. After landing the catch, Mitchell was blown away by its beauty. He had caught a mako shark – a streamlined slab of predatory power. It was graced with to-die-for blue and white hues. Immediately, his design sensibilities kicked in. He saw a way to bring to the roads what had previously been confined to the deep. That short-fin shark was about to go global!

The Stingray \’Spider\’ was first of the breed. A racing test-bed, it was the high-revving base upon which the Mako Shark was built. The Stingray would be the final piece in the jigsaw. Of course, many of the Stingray\’s styling motifs can be seen in the Mako Shark 1. Indeed, they had the same designer – Larry Shinoda. But even the Stingray had its work cut out to compete with its prototype predecessor. Its projectile-style bodywork and gradational paint took pride of place – but they were just the beginning. Not just the exterior – but the interior, too – were a futuristic time-warp of avant-garde art. It was the start of the Sixties, after all – the ideal time to get radical with form and function. With plastic now the new gold standard, the wraparound windscreen and see-through hardtop were \’classic\’ space-age styling touches. Topping them off was a \’periscope\’ rear-view mirror. Ranged along the car\’s flanks were two banks of exhausts – catering to the 456bhp that its V8 engine output. One thing is for sure. When that mako shark mammal gave up its life – in the waters off Florida – an automotive legend was born. Long live the Chevrolet Corvette Mako Shark 1!