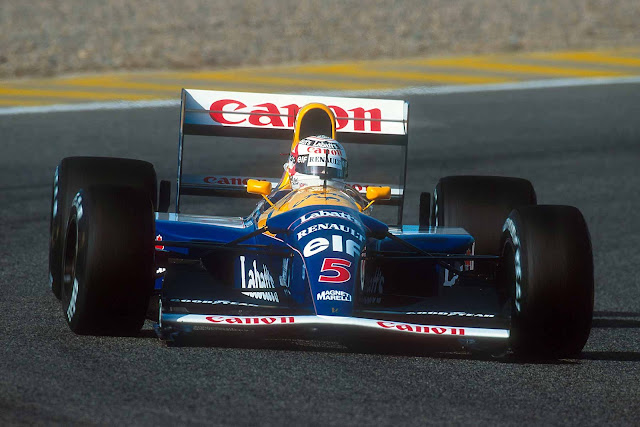 The Williams F1 team has proffered many an exotic race car over the years. Few, though, have had quite the allure of the FW14B. From the moment its designer Patrick Head picked up his pen, the \’92 World Championship was decided. But, there was another key FW14B factor. The legendary Nigel Mansell! For, he was in sync with the car to an uncanny degree. Are certain drivers born to certain cockpits? Who knows! One thing is for sure. No-one else was going to be winning that year\’s titles. That is how far ahead of the field Mansell and the FW14B were.

The key component in the FW14B package was \’active-ride\’ suspension. Lotus had already blazed a trail for the new set-up. Williams followed suit, in \’87. In \’88, too, they continued their \’active-ride\’ mission. Patrick Head\’s faith, though, was shaken by reliability issues. Nothing daunted, Adrian Newey – Williams\’ chief aerodynamicist – had done enough wind tunnel testing, to be sure that \’active-ride\’ was still the way to go. The idea was to keep the FW14B uniformly upright – or, as close as possible, given the humungous forces to which it was subjected. Newey badgered Head into giving active-ride one last chance – reliability gremlins, notwithstanding. Come \’91, and the system was duly slotted into the Williams FW14 chassis. The motor racing gods must have been smiling. This time around, everything gelled.

Immediately the FW14B dropped off the blocks, it hit the ground running. It won the first five GPs. Four more victories would follow – as Mansell grabbed the \’92 season by the scruff of its neck. There were just two races at which he and the Williams did not start from pole. The car\’s Renault V10 engine performed perfectly, while using far less fuel than its main rival – the McLaren-Honda V12. There was nowhere to hide for the opposition. Williams had covered all bases. Even the FW14B\’s paint scheme outshone its competitors! With those bold primary colours careening round circuits, spectators were treated to a rich visual feast, too. Of course, that iconic livery will be forever associated with the great Nigel Mansell. A pundit was once asked who was the most determined F1 driver he had ever met? \’Oh, that\’s an easy one\’, he said. \’Nigel Mansell would\’ve driven a car through a brick wall to get something done!\’ But – with the FW14B – he did not have to. Head and Newey had made his life easy … well, relatively speaking, anyway. One of the most iconic cars ever to lap a track, the Williams FW14B was miles ahead of its rivals. Something that makes an F1 driver very happy. Even Nigel Mansell!