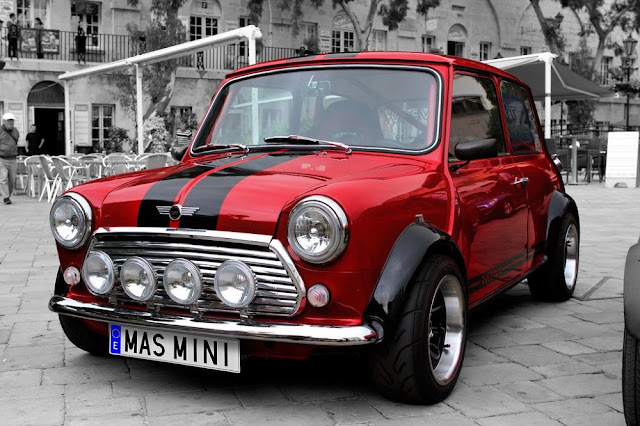 The BMC Mini was launched in \’59. Just in time, then, for the start of the \’Swinging Sixties\’ – a British cultural highpoint it helped to define. Subsequently, a poll of motoring luminaries went even further – voting it \’Car of the Century\’. You did not have to look too hard to find its \’unique selling point\’ … its size – or lack of it! Alec Issigonis – the Mini\’s designer – was obsessive about not wasting an inch of automotive real estate. The Mini was a utility vehicle, par excellence. Yet, it was also one of the coolest cars ever to turn a wheel … each of which was a less than whopping 10″ in diameter! Issigonis\’ design process really did include sketches on the backs of envelopes. But, then, they were for the Mini! Anyway, it worked – more than 5,300,000 Minis were built. That made it Britain\’s best-selling car … ever!

Space-saving, then, was the Mini\’s raison d\’être. Its front-wheel-drive set-up was key to this … as was the fact that the gearbox was placed beneath the engine. The Mini was a tour de force, technically. Dr Alex Moulton dreamed up radical rubber-cone suspension for the car. BMC quoted \’penny-a-mile\’ running costs. Bear in mind that the Mini was conceived in the wake of the \’56 Suez Crisis – when fuel prices were at a premium. But, economical as it was, the Mini could shift a bit, too. Fastest of all was the Mini-Cooper S model. Named after John Cooper – the legendary race-car constructor – the top-spec version delivered 76bhp. And a top speed of 96mph. The Mini had always handled well … now it had a motor to match. Standard-spec Coopers won the Tulip Rally – in \’62 and \’63. The Cooper S won the Monte Carlo Rally – in \’64, \’65 and \’67. That was on top of ruling the roost in British saloon car racing.

The Mini even moved into the luxury car market … well, after a fashion! Both Radford and Wood – and Pickett – turned out coach-built versions of the car. Pink Panther actor Peter Sellers owned one of Radford and Wood\’s creations. Presumably – after all his success – Sellers bought a Mini with an eye to style, rather than cost. But, Minis were comparatively affordable … in standard trim, at least. The cost of the original cars was kept down by fitting sliding windows, cable-pull door releases, and externally welded body seams. To begin with, there were just two models to choose from – the Austin Mini Seven, and Morris Mini-Minor. The latter came in basic or de luxe versions. Over time, the use of alternative sub-frames enabled several variations on the theme. There were Mini vans, pick-ups, and estate cars. Not to mention, the Mini Moke and Cabriolet. The Mini, in turn, went on to influence other cars – like the long-boot Riley Elf and Wolseley Hornet. Ultimately, though, the Mini was unique. Usually, iconic cars are comprised of vast swathes of metal. The Mini, though, went to the other extreme. Petite, certainly … but always perfectly-formed!