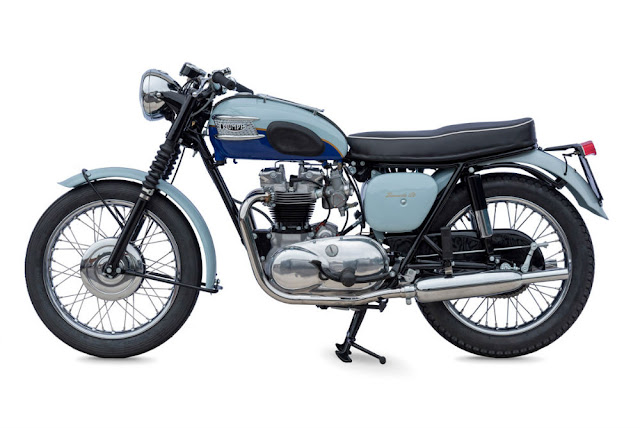 The Triumph T120 Bonneville must be among the most iconic motorbikes ever made. Indeed, its name alone is liable to induce weak knees in its devotees. The Bonnie – as it was dubbed – invokes visions of a time when the material world was made out of metal. Plastic, back then, was but a brittle blip on the horizon. Now, it goes without saying that the future of the planet comes before that of classic motorcycles … well, it does, according to non-bikers, anyway! That said, the petroleum and oils of yesteryear had a \’spirit\’ – which today\’s sanitised synthetics singularly lack. Such \’aromatic\’ products were an essential part of the design icon that is the Triumph Bonneville.

It is ironic that a bike that so epitomises Sixties Britain should reference the US. Utah\’s Bonneville salt flats have long been the snow-white setting for many a piece of high-speed history. In \’56, for example, Johnny Allen climbed aboard a Triumph Streamliner – and proceeded to gun it up to 214mph. The Triumph Bonneville roadster was good for just over half that. Still, 110mph was more than enough for most \’ton-up boys\’, at the time. Indeed, it allowed them 10mph leeway … in case of headwinds, perhaps – or less than clean carbs! Bonnie aficionados spent so much time in the saddle that it became a virtual part of their anatomies. And that was pre-computer games!

In Triumph\’s glory days, the Bonneville was the beacon for the brand. Some quarter of a million Bonnies passed through the firm\’s Meriden factory gates. On the Isle of Man, a Bonneville won the Production TT – in \’67. Two seasons later, and a Bonneville set the first \’proddy racer\’ 100mph lap of \’the island\’. Those ton-up boys must have been in seventh heaven! And even on less celebrated roads, the Triumph T120 Bonneville was a legend in its own landscape. So, when the rockers decamped to the seaside, that infamous day in the Sixties – to do battle with the mods – it is a safe bet there was many a Bonnie blasting down to Brighton beach!