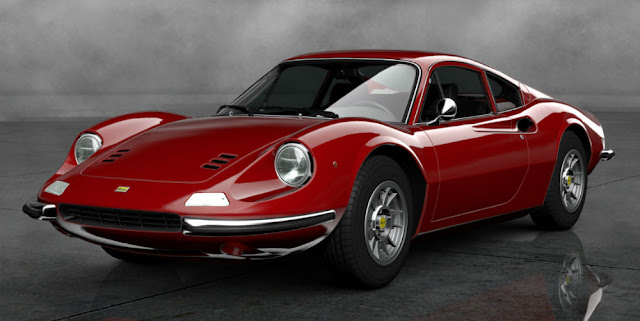 When is a Ferrari not a Ferrari? When it is a Dino! How so? Well, what defines a Ferrari? Why, the prancing horse logo, of course. But the 246 only ever wore Dino GT insignia. The firm\’s founder, Enzo Ferrari, wanted this car to be a \’marque\’ all its own. There was a good – and moving – reason for that. He had prematurely lost his son Alfredino – so the car was a father\’s tribute. Even Enzo, though, may have conceded that the \’Dino\’ was a Ferrari in all but name.

Enzo had no qualms about including Fiat in such a personal project. The two firms struck a deal which enabled Ferrari to compete in the F2 racing series. To enter, homologation rules required that 500 roadsters be produced. Financially, Ferrari were not in a position to supply engines for that many Dinos. For the mighty Fiat corporation, though, such numbers were not a problem. So it was that – inside every Ferrari Dino – there lurks the spirit of Fiat.

Stylistically, the Dino was unaffected by the mechanical shenanigans. Beauty on wheels, its Pininfarina/Bertone styling was visible in every perfect curve. Of course, no car was ever going to make up for losing a son. It is to be hoped, however, that the Ferrari Dino was some small source of solace for the great man.