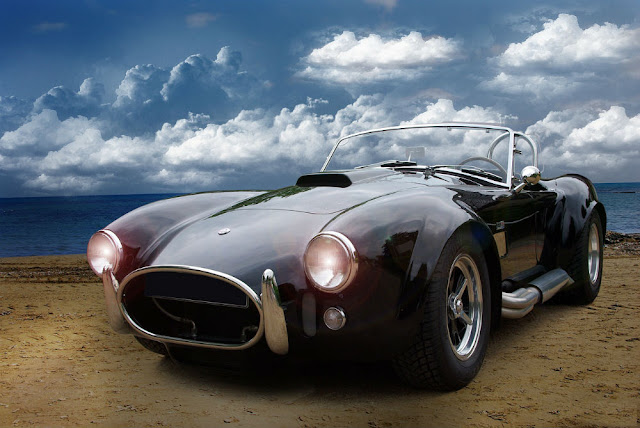 Rarely has the \’special relationship\’ – the trans-Atlantic alliance between the UK and the US – come up with something quite as special as the AC Cobra. Texan Carroll Shelby sought out AC Cars – in Thames Ditton, England. The firm had been founded by the Weller brothers – in West Norwood, London – in 1901. How would AC feel about Shelby inserting a Ford V8 engine into his take on their sinuous bodywork? The curtain was about to be raised on one of the most memorable sports cars of all time.

The Cobra\’s svelte lines were clearly drawn from the AC Ace. The \’Ace\’ was an elegant British sports car. But the Cobra\’s beefcake build would be boldly all-American. Shelby was a successful racing driver. When it came to the Cobra, then, he wanted power – and plenty of it. Its 7-litre Ford mill unleashed 490 wild horses – or their automotive equivalent! And the Cobra\’s pushrod V8 spat out torque on tap. The AC\’s light-alloy body shell slimmed-down power-to-weight still further. Thankfully, disc brakes were fitted all round!

The cars were sold as both Shelby and Ford Cobras. In race trim, they were Shelby American Cobras. Only 1,000 or so cars were built. Their legacy, though, will live forever – or as long as men like Shelby feel compelled to compete. There have been Presidents with less presence than the AC Cobra. Big fun, in a big country, basically!