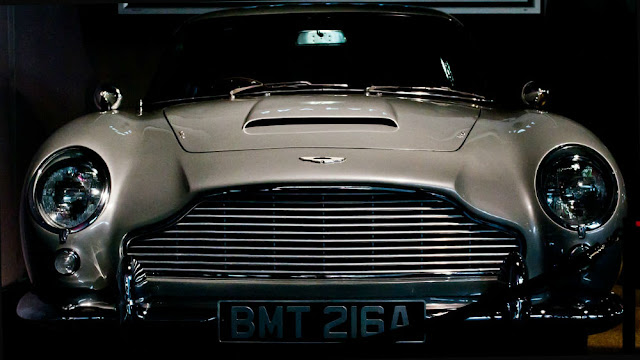 The Aston Martin DB5 was a blue-blooded aristocrat. The member of society\’s upper tier with whom the car is most associated is, of course, James Bond. For, the DB5 played a starring rôle in Goldfinger. Indeed, it was unthinkable that \’007\’ would have driven anything else! And, when Bond was in the countryside – recuperating from the rigours of defending the Western world – he would have been seen in a \’shooting-brake\’ DB5. Just 12 of these rarefied estate cars were built. Now, that is exclusivity, Miss Moneypenny!

At the heart of the Aston\’s allure was its beautiful bodywork. Alloy panels came courtesy of Touring – the illustrious Italian design house. A network of minimalist tubing made up a skeletal frame. On that was laid the car\’s finely-chiselled outer skin. Flared-in headlights were a fashionable feature. They also helped the DB5\’s aerodynamics. A top speed of 140mph said it all. If you needed an extra 10mph on top of that, a tuned Vantage engine was always an option. The 4/5-speed ZF transmission was eminently tractable. Solid disc brakes were fitted all round.

So, the DB5 mixed cutting edge technology with sought-after styling. It added its own take to decades of impeccably-wrought Aston craftsmanship. It was as suave and sophisticated as cars get. It had \’licensed to kill\’ looks. And its 4-litre straight-6 engine had performance to match. 282bhp was on free-flowing tap … shaken, but not stirred, of course! \’DB\’ stood for David Brown. And his firm\’s reputation now soared to new heights. After all, the Aston Martin DB5 was James Bond\’s personal transport. And it does not come much classier than that!