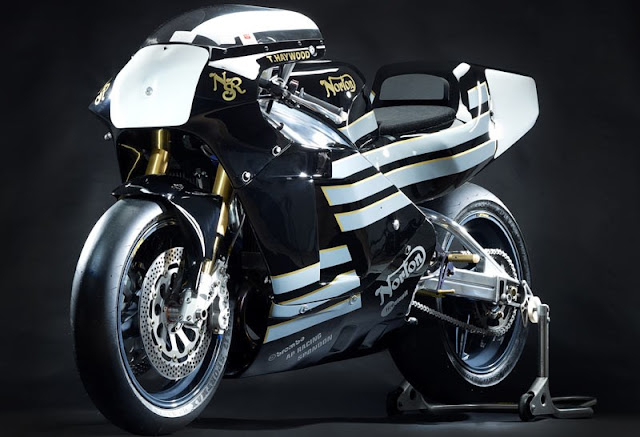 The Norton NRS 588 – the \’rotary\’ Norton racer – was the brainchild of engineer Brian Crighton. His innovative project was at first rejected by Norton management. Crighton built the bike anyway, off his own bat. In the caretaker\’s shed! Subsequently, it performed so well in speed tests that Norton\’s top brass had a sudden change of heart! They flashed the green light for its development.

Riders Trevor Nation and Steve Spray were joined at the hip with the \’JPS Norton\’. In their black, silver and gold leathers, they and the bikes were a stunning sight at British circuits. \’Rocket\’ Ron Haslam, too, played a pivotal part in the bike\’s success.

Revered for its jet-like straight-line speed, the rotary engine\’s braking – or lack of it – made cornering much more of a challenge! The rear end snaking this way and that on entry was often the source of much spectator mirth. The Norton NRS 588, then, was an iconic British race bike – one guaranteed to render misty-eyed race-goers of the time. And all thanks to Brian Crighton … and his powers of perseverance!