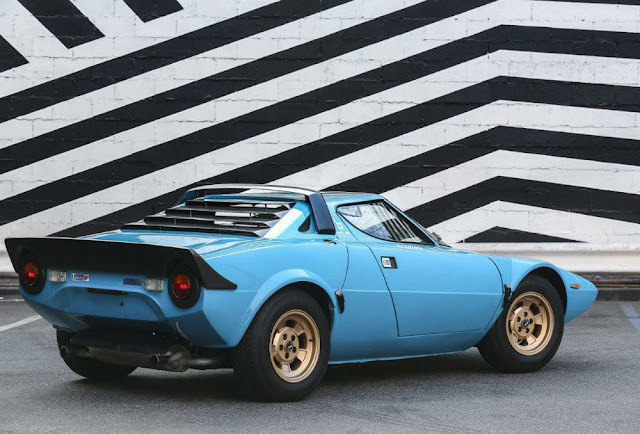 The Lancia Stratos was a \’wedge\’ on wheels. \’Stratos\’ was short for stratosphere … precisely where the driver would be headed, should the car\’s performance not be treated with the necessary respect! The car\’s blade of a shape sliced through air. It was only on the road, as a means to a competitive end. 500 production models had to be built, to allow Lancia to contest the Group 4 rally version.

The Stratos was not conceived with motorsport in mind. For some time, Lancia had been slipping behind its rivals – both on the road and at the racetrack. As soon as Cesare Fiorio – head of Lancia\’s autosport arm – clocked the Stratos concept car, he straightaway saw a chance to get things Lancia back on track. That was at 1970\’s Turin motor show. Styled by Marcello Gandini – at Bertone – the Stratos looked stunning. But, technically, too, it was perfect for Fiorio\’s purpose. Suitably light, its engine bay was centrally-located. Install a Ferrari Dino motor – and Fiorio was sure it would have the trappings of a top-flight rally car.

It was a long way from the cool confines of the Turin show, to the blazing heat of the world\’s hottest rally stages. But, with beefed-up suspension – and a more upright driving position – the Stratos was eventually good to go. And in its iconic \’Alitalia\’ livery, it certainly looked the part. As a rally car, it would be legendary. And – in road-going mode, too – there have been few cars so \’sharp\’ as the Lancia Stratos!