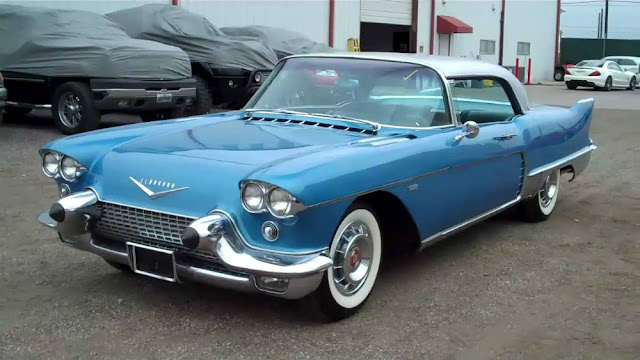 As \’50s cars go, the Cadillac Eldorado Brougham was understated. Next to its sibling, the Eldorado Biarritz, for example, the Brougham\’s tail fins were positively petite. Such delicacies were to be found on other parts of the car, too. The aluminium roof – minus pillars – was a shining example. And the narrow, whitewall tyres were a stylish delight. From a design history point of view, the Brougham was the first car to feature twin headlights. It was based on a \’dream car\’ prototype – first shown at \’54\’s Motorama. The \’Park Avenue\’ was a four-door sedan. It made serious waves when exhibited on GM\’s stand. As a result, Harley Earl – General Motors\’ head of design – hinted it might go into production. It duly did. The Eldorado Brougham was released in \’57.

The Brougham\’s brand of elegance was more than skin-deep. The interior accessories list was a long one. It comprised items more associated with fashion than automobiles. Female passengers were particularly pampered. How about polarised sun visors, magnetised tumblers – and cigarette and tissue dispensers? Lipstick and cologne, a compact and powder puff, and a mirror and comb were thoughtfully provided. There was even an Arpege atomiser – with Lanvin perfume. And carpeting was in karakul – or lambskin. Hey, any lady who complained about that little lot might be asked to exit at the next set of lights!

But, the Brougham\’s litany of luxuries did not stop there. It was only right that more masculine tastes be catered to, too. Like a 6.3-litre V8 – dishing up 325bhp. It was hitched up to GM\’s \’Hydramatic\’ transmission. The chassis was \’X-frame\’ – held up by air-assisted suspension. There were both power brakes and steering. Plus, electrically-operated seats and windows. The cabin was wired for pretty much everything – given that this was still the Fifties. Gadgets and gizmos abounded. The Cadillac Eldorado Brougham was one of the most exotic cars ever to have come out of Detroit. A skilfully contrived cocktail of restrained glamour. And on top of all that, it could be customised. With 44 trim combinations available, your dream Caddy was a cinch!