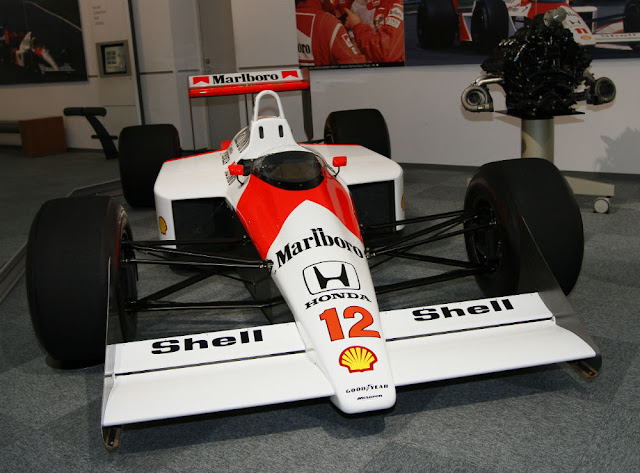 The McLaren-Honda MP4/4 is, arguably, the most successful F1 car in history. Then again, it could not have had two more able drivers. Ayrton Senna and Alain Prost were at the peak of their considerable powers at the time. Throughout the \’88 season, the pair extracted the max from the MP4/4. Well, almost! Between them, they won 15 times from 16 starts. The Italian GP was the one that got away. Senna got bamboozled by a back-marker. With Prost also out, victory at Monza just was not to be.

McLaren began the \’88 campaign with mixed emotions. In the plus column, they had secured Honda as an engine supplier. The year before, the Japanese giant had helped arch-rivals Williams win the World Championship. But, in the minus column, McLaren had lost ace designer John Barnard. Given that he had sculpted every McLaren since \’81, he would inevitably be sorely missed. In his stead, Steve Nichols and Neil Oatley stepped boldly up to the high-tech plate. The previous year\’s car – the MP4/3 – had been powered by Porsche. The Honda motor that replaced it was also a V6 – and similarly configured. That meant it slotted neatly into the MP4/3\’s tried and trusted aerodynamic package. The only visible change to the bodywork was a narrower cockpit.

The \’88 season would be turbocharged engines\’ last hurrah. The F1 powers that be had decreed that thereafter they would be banned. Notwithstanding that their engine would soon be obsolete, Honda in no way took their foot off the gas. They wrung every last drop out of the new V6. Indeed, they went so far as to build alternative versions – the XE2 and XE3. They could be toggled by McLaren, according to the circuit layout. Because of the extra prep, McLaren were late for pre-season testing. If that made their rivals chuckle, the mirth was short-lived. McLaren duly fired up the new engines – and sent the cars out. They left the opposition for dead. Come the first race – and it was more of the same. So it stayed for the rest of the season. Proof was provided by that near-perfect win tally. Senna and Prost, then, were nigh on unbeatable … stymied only by that Monza back-marker. That made the McLaren-Honda MP4/4 the greatest GP car of them all … well, statistically-speaking, at least!