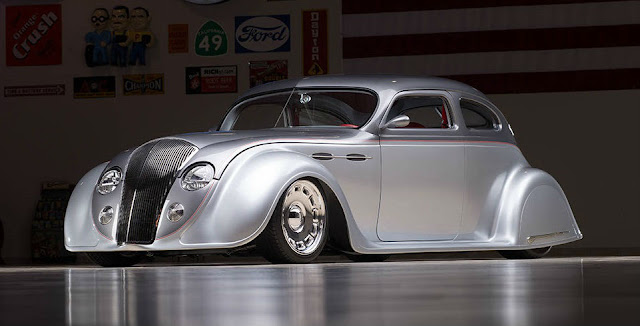 The Chrysler Airflow was where Art met Science! Its body lines were aerodynamic – at a time when that craft was a mere glint in a boffin\’s eye. Indeed, the Airflow was the first production car to feature the fledgeling craft. A wind tunnel was duly constructed. Today, such systems are considered arcane … in the early \’30s, they were a black art! The Airflow wizards of engineering were Carl Breer, Fred Zeder and Owen Skelton. Breer had been first to be smitten by the new-fangled science. Zeder and Skelton soon followed suit. And it did no harm at all when pioneer pilot Orville Wright\’s input was added. Over 50 test cars were subsequently built. So – by a process of painstaking refinement – the Chrysler Airflow gradually took shape.

The Airflow, though, was not just aerodynamics. Weight-saving, too, was part of its brief. Its svelte frame was made from light metal – rather than heavy timber. Perched on that frame was a monocoque body. That reduced weight still further. What mass was left was optimally placed. The engine was over the front wheels – with ride and handling in mind. The seats sat neatly within the wheelbase – in the interests of balance. Thanks to all the wind-cheating work, the Airflow was well-placed to \’turn up the wick\’, when required. A top speed of 88mph was not to be sniffed at, in \’34.

The Airflow\’s sales, though, were lacklustre. Walter Chrysler showed courage and commitment, in commissioning the car. But, the Airflow was the future. Buyers were not yet ready for its \’free-flowing\’ lines. On top of that, there were rumours of build quality faults … on account of new welding techniques. Ultimately, though, cars like the Airflow are not about sales. Rather, they are about the legacy they leave – and the visions they engender. The Chrysler Airflow influenced automotive design for decades!