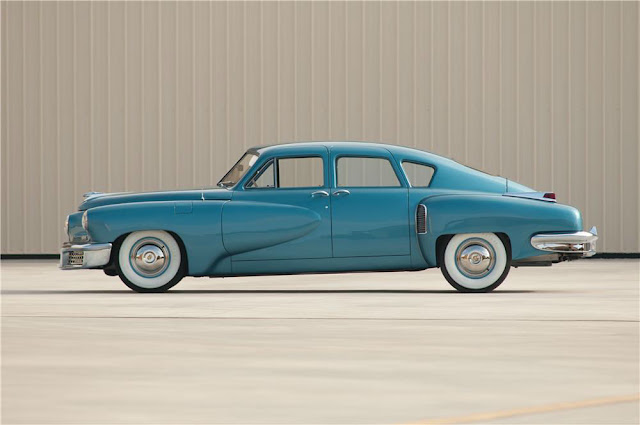 The Tucker Torpedo came out of left field. Its designer – Preston T Tucker – was a confirmed maverick. Cars were in his blood. He started out at Cadillac – as an office boy. After a stint as a car salesman, he became a partner in an Indianapolis motor racing business. In \’45 – with the War over – Tucker determined to create the ultimate car. Style and speed would come as standard. But, there would be more.

When it came to \’health and safety\’ – especially of the automotive kind – Tucker was an evangelist. Maybe it was a war thing. In the last few years, an ocean of blood had been shed. Perhaps Tucker had seen enough – and decided to redress the balance a bit. To that end, the Torpedo would have seat-belts. A padded dashboard and pop-out windscreen, too. Where accident prevention was concerned, Tucker dreamed big. But – as the Torpedo entered production – the real world kicked in. As in the \’bottom line\’. Customers were concerned about seat-belts. Why did the car need them, they asked. The marketing men got jitters. Seat-belts were subsequently binned. Along with swivelling headlights, disc brakes and the central driving position. In the end, Tucker settled for independent suspension. Oh, and the padded dashboard!

To be fair to Tucker, he was right to be anxious. After all, the Torpedo could certainly shift. Its flat-6-cylinder engine gave 166bhp. Top speed was 121mph. Rear-mounted – and water-cooled – the motor was bleeding edge. \’47 saw the launch of the Torpedo\’s final model. Just a year before, Tucker had bought the world\’s biggest factory. The new premises – in Chicago – had been an aircraft plant. But, a problem was looming. Tucker was accused of fraud. He had – it was alleged – tampered with the Torpedo\’s design. Having already signed contracts. Tucker pleaded with the industry – categorically denying the claims. But – though he was cleared in court – mud stuck. Shortly thereafter, The Tucker Corporation filed for bankruptcy. It was a sad finale to so much idealism. Preston T Tucker\’s Torpedo was built to save lives – not end them!