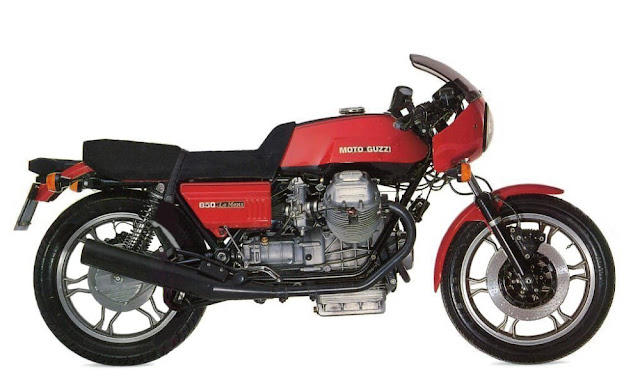 Moto Guzzi is rightly renowned for rugged, reliable machines. If any bike is going to get from A to B, a Guzzi stands as good a chance as any. One model, though, that had more going for it than mere practicality, was the Le Mans 850. Strong and purposeful, certainly. But, also a kingpin of two-wheeled design.

The Le Mans\’ top speed of 130mph was plenty impressive, in \’76. Especially, since it was delivered by shaft-drive. A relatively heavy power-train, it is more associated with low maintenance, than high performance. So, like its second to none Italian styling, the Le Mans motor was simple – but effective.

The engine in question was an across-the-frame V-twin. So interlinked is it with Moto Guzzi, that it has attained iconic status among fans of the Mandello del Lario marque. Rather like another well-known V-twin – made in Milwaukee. Except that Harley-Davidson opted for a longitudinal layout. Guzzi\’s mill was first installed in a 3-wheeler … built to cross mountains. Suffice it to say, torque was not an issue! It would be a long journey from such icy wastes – to the furnace of France\’s most famous racetrack. But, the Le Mans ate up the miles … and never missed a beat. Which probably goes some way to explaining why Moto Guzzi – founded in \’21 – has outlasted any other European motorcycle manufacturer. The Le Mans 850, then, blended style, power and solidity – in pretty much equal measure!