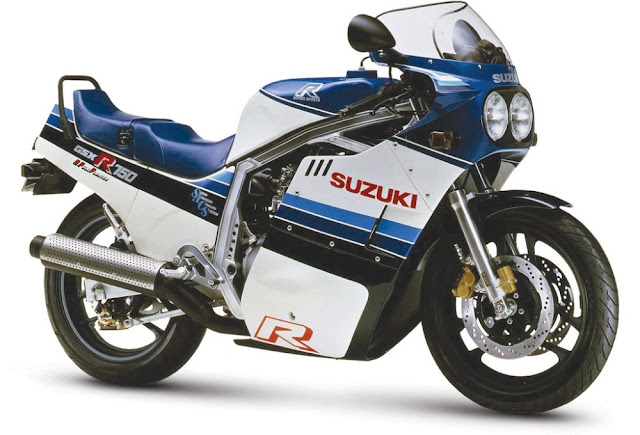 By no means every motorbike can claim to be the first of its kind. One that can is the Suzuki GSX-R750. So closely did its looks reflect those of Suzuki\’s \’85 Endurance racer, that it was designated a \’race-replica\’. Performance-wise, too, it did not fall far short. 145mph on the road was not for the faint-hearted!

The \’Gixer\’, then, was built to go fast. Corners were no obstacle to that mission statement. The GSX-R\’s light aluminium frame – and beefed-up forks – made it highly \’flickable\’. Powering out of bends, though, needed the rev-needle firmly to the right. The GSX-R\’s power-band was uncompromising. Low-down \’grunt\’ was not its strong suit. Keep the revs up, though, and you were flying. When slowing could not be put off any longer, state of the art stoppers responded with relish.

The first GSX-R 750 was dubbed the \’slab-side\’. That referenced the perpendicular lines of its design. Certainly, it communicated solidity – and a sense of purpose. So – single-handedly – the Suzuki GSX-R750 sparked the \’race-rep\’ revolution. After that, roadsters really were not ever the same again!