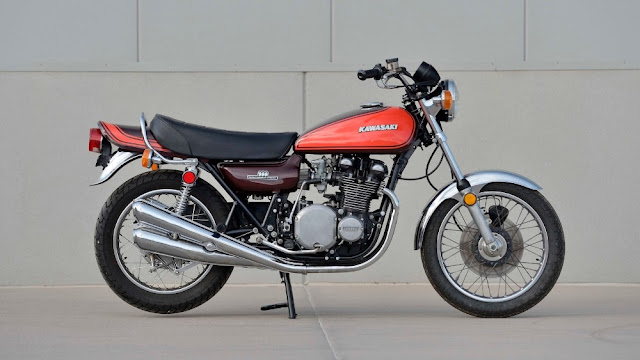 The Kawasaki Z1 was nick-named the \’King\’ … which kind of says it all! Suffice it to say, it was well-received – on its release, in \’73. Riders had been putting up with past its sell-by date technology for years. As often as not, it was down to outdated management techniques. All that was blown away by the Oriental invasion. When the Japanese – and their new wave of machines -disembarked at the Isle of Man, \’Brit bikes\’ were dead in the water. The TT wins which followed presaged the future – not just for racers, but roadsters. When the Z1 hit the showrooms, the future had arrived.

The Z1\’s twin-camshaft, four-cylinder motor left its road-going rivals reeling! The ageing \’thumpers\’, twins and triples simply could not compete. The Z1 took cycle parts, too, to another level. Performance stats had gone up a gear … well, several gears, actually! The \’King\’ came, saw, and conquered! Before long, the British bike industry was a mere memory.

The new bike heralded Kawasaki\’s iconic \’Z\’-series. A plethora of \’superbikes\’ – from the \’big four\’ Japanese manufacturers – followed. Never again would bikers settle for second-best. From that point on, a test-ride delivered outstanding performance, handling and braking – or the deal was off! The Kawasaki Z1 had secured its place in motorcycling\’s pantheon. As for Brit bikes … the king was dead, long live the \’King\’!