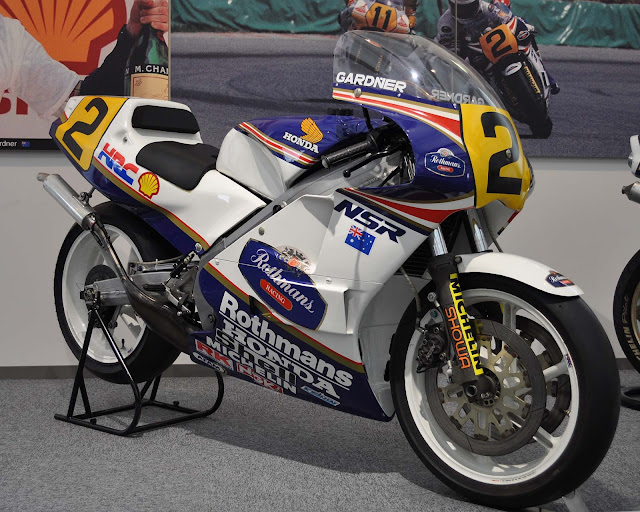 Freddie Spencer, Eddie Lawson, Mick Doohan, Wayne Gardner. Four of the finest riders ever to have straddled a race bike. And they all grappled with the Honda NSR 500, at some point. I say \’grappled with\’, because the NSR was never the best-handling bike out there. Its one-of-a-kind V4 engine, though, more than made up for any deficiencies through the twisty bits. Numerous race wins – and indeed, world championships – are the strongest testament to that.

So, the NSR\’s staggering straight-line speed was never in doubt. Shinichi Itoh – aboard an NSR 500 – was the first rider to top 200mph. That was at Hockenheim, in \’93. Itoh had a neck-wrenching 185bhp at his disposal that day. The NSR\’s performance stats were eclipsed only by its success rate. By the time Valentino Rossi signed off the GP 2-stroke era – on an NSR, in 2001 – it had won 10 \’blue riband\’ titles in 18 years. Mick Doohan took five of them – on the spin! Back in \’85, \’Fast Freddie\’ Spencer had won the 500 and 250cc World Championships … both on Honda NSRs!

Visually, too, the \’Rothmans\’ Honda impressed. While tobacco sponsorship has fallen from favour, there is no denying it inspired some superb paint-jobs. The NSR\’s was among the most lustrous. A satisfying blend of hues and graphics, so to speak! A true legend of the race-track, then, the NSR 500 has to be one of the most iconic bikes the \’Honda Racing Corporation\’ has ever created!