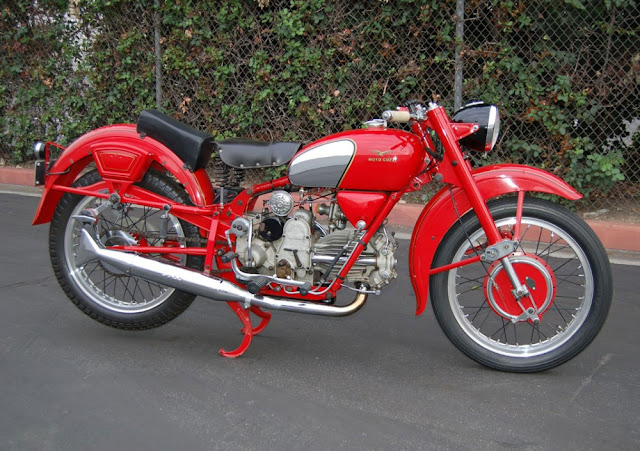 The Moto Guzzi Falcone was one of the most successful machines in the firm\’s history. It flew onto the European bike scene in 1950. Falcone was fitting – since Moto Guzzi\’s emblem is an eagle. That was decided when one of the founders – Giovanni Ravelli – was killed in a plane crash. In tribute, his two partners co-opted the winged insignia of their air corps.

The Falcone was the latest in a line of flat-single-cylinder bikes from Guzzi. They took in everything from luxury tourers to pared-down racers. Twin versions of the Falcone were offered – Sport and Touring. They kept the Falcone flag flying until \’76 – a full 26 years after its launch. It became an icon on Italian roads. In Sport mode – with its flat \’bars and rear-set footrests – the Falcone was an impressive sight. Its fire-engine red paintwork was eye-catching, to say the least. Ordinarily, top speed was 85mph. But the cognoscenti knew that a sprinkling of Dondolino engine parts served up an appetising 100mph. With a bracing shot of low-down grunt as an apéritif.

The blueprint for the Falcone\’s 498cc engine was drawn in 1920. Back when Carlo Guzzi designed the first of the bikes that would bear his name. The 4-stroke motor – with its horizontal cylinder – had plenty of stamina. It just kept on going – whatever was asked of it. Moto Guzzi has been around for a century now. Its products have always been stylish – but with a homely feel, to boot. Borne up by their ever-loyal fan base, here is to another 100 years of gorgeous Guzzis. And more bikes with the finesse of the Falcone!