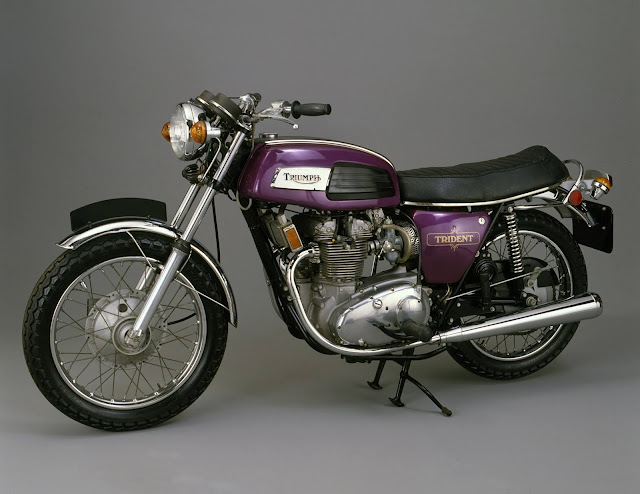 Not even its most ardent fan would claim the Triumph Trident T150 to be the best-looking of bikes. Especially in the curve-conscious USA – where the Trident\’s straight-line styling was not to every taste. True – the Trident\’s \’ray-gun\’ silencer was Batman-flash. But that alone was not sufficient to rescue a somewhat staid design. Ergonomically, too, things were decidedly conventional. Particularly the \’sit up and beg\’ riding position. This was a British-built bike, after all … not a cool American cruiser. Styling-wise, it was more stiff upper lip!

On the performance chart, though, the Trident\’s spikes were higher. It made steady progress up to a top speed of 125mph. And there was high-quality handling, to match. Unfortunately for the Trident, the timing of its \’69 launch was not great. The Honda CB750\’s release was just around the corner. And the Japanese machine\’s four-cylinder engine would usher in a new dawn for motorcycling.

Not that that mattered at the racetrack. The Triumph Trident would be etched into the annals of sporting history – by the legend that was \’Slippery Sam\’. Percy Tait took the Trident-based racer to production TT triumph – from \’71 through to \’75. At Stateside circuits, too, Triumph triples blazed a trail. In large part, that was thanks to their Rob North frames. In \’71, Gene Romero finished second at Daytona. His Triumph looked suitably resplendent in its blue-and-white fairing. A mixed review, then, for the Trident. While it was cheered to the echo at the citadels of racing, design-conscious road-riders were not always as rapturous. But if the Triumph Trident T150 was ever thought of as a tad dull – that was before its throttle was twisted!