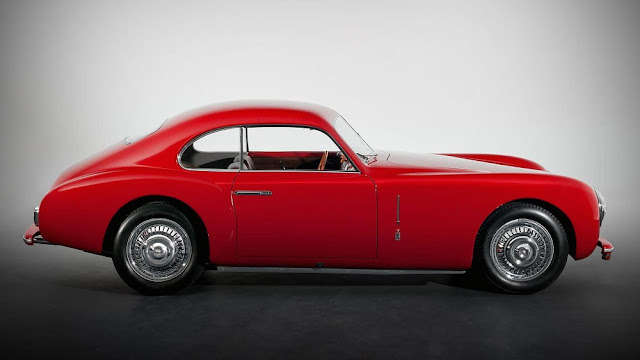 The Cisitalia 202 has been on display in NY\’s Museum of Modern Art since \’51. Innovative styling, then, was a given. That came courtesy of Pininfarina – based in Turin, Italy. Their coachbuilding concept was \’integration\’. Features flowed into each other, as never before. Front mudguards and headlights, for instance, bled seamlessly into the front wings. In a few strokes of \’Pinin\’ Farina\’s pen, automotive design had moved on.

In terms of the 202\’s form, then, things were just fine. But functionally, too, it excelled. A solid round-tube frame supported \’slippery\’ bodywork. The car cut through air like a scalpel. As a result, it was good for 105mph … 120, in competition mode. All from just 50bhp – and a tuned in-line four Fiat 1100 motor. A 4-speed transmission eased the 202 up to such speeds.

Pininfarina\’s input finessed the fine detail. Flip-out door handles were a typical flourish. The 202\’s cabin was a paragon of minimalism – and safety. No redundant, distracting dials here. On the 202\’s launch – in \’46 – Cisitalia was still a new company. Short for \’Consorzio Industriale Sportive Italia\’, it was founded by Piero Dusio. He was a businessman/racing driver. Cisitalia\’s first specialist product was a single-seater racer. Built by Fiat engineers Giacosa and Savonuzzi, it would subsequently serve as a template for the cars that followed. Sadly – just a year after the 202\’s release – Cisitalia was already in trouble. Boss Dusio already hankered after a GP car, to be designed by Porsche. That did not sit well with his fledgeling firm\’s finances. By \’63, it was over. As car companies go, then, Cisitalia was a flash in the pan. The 202, though, burned brightly – not least, as an exhibit at MoMA. A mechanical masterpiece, it lit up the car world for years!