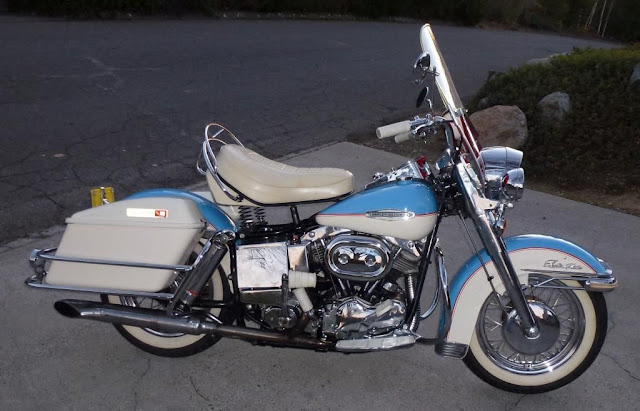 Glamorous as they are, not many bikes have made it to the movies. One that did swan serenely across the big screen was a Harley-Davidson. The film was Electra Glide in Blue. The \’hog\’ fully lived up to its star billing. It caught Harley\’s free-wheeling spirit, to a tee … even if it was a police bike! A kingpin of long-legged tourers, the \’Glide\’ was American to its apple-pie core. It was made to go places. After all – as another great movie put it – \’It\’s a big country!\’

Styling-wise, the Glide was pure Americana. Big, basically. Big fenders, big tires, big gas tank. And – most importantly – big attitude! No marque does machismo quite like Harley. If you are uncomfortable being looked at, don\’t even think about getting one. Whether you want to be or not, on a Harley, you are a star. There are those who would kill for that kind of kudos!

The Electra Glide\’s technical spec was impressive. In \’65, its motor measured 1,198cc. Piston stroke was 100.6mm. In other words, tall and torquey. Mind you, the Glide needed its pulling power. 770lb was a lot to shift. Notwithstanding, top speed was a cool 95mph. Unsurprisingly, the Electra Glide received glowing reviews. It still ripped up the red carpet, though – in true Harley-Davidson style. \’Here\’s looking at you, Glide!\’