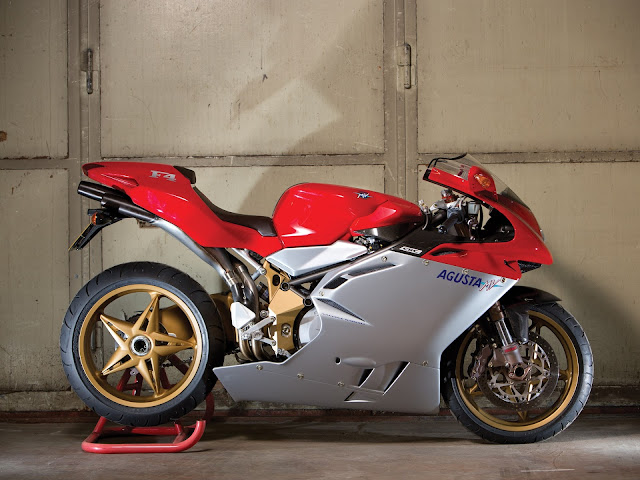 The MV Agusta 750 F4 was the work of a master motorcycle designer. His name was Massimo Tamburini. Ducati and Cagiva were other legendary marques for which he picked up a pen. Arguably, the 750 F4 represented the peak of his design perfectionism. A modern-day da Vinci, Tamburini fused Science and Art. With the Serie Oro F4, Tamburini turned alchemist – morphing metal into gold.

The F4\’s visual prowess was matched only by its technical spec. Its top speed was a heady 165mph. That was down to an output of 126bhp. A dry weight of just 406lb helped, too. 16 radial valves – 4 per cylinder – were key to the power stat. As for the light weight – the F4\’s bodywork was skinnier than Twiggy\’s!

Exiting the rarefied air of the design studio – and encountering the rigours of the real world – never phased the F4. Its state of the art cycle parts saw to that. The bike could \’handle\’ any road surface thrown at it. Surging through the revs was sewing-machine smooth. The bike\’s brakes shed speed in an instant. It is true that the F4 had rivals, technically. But – clad in its silver and red mantle – it reigned supreme on the styling front. Italian to its core, the MV Agusta 750 F4 radiated elegance. It was, quite simply, one of the most ravishing-looking motorbikes ever made. Massimo Tamburini knew a thing or two about them!