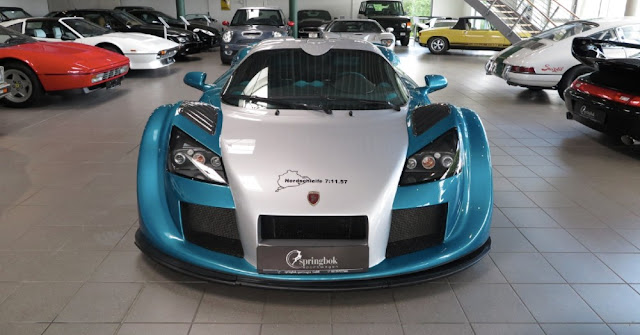 Roland Gumpert – developer of the Apollo – was a man on a mission. He had previously been Audi\’s Director of Motorsport. Engineering-wise, then, the Apollo was in the surest of hands. Indeed, few cars could hold a candle to it, technically. Visual design was by Marco Vanetta. The jury has long been out on the Apollo\’s looks. Its shape has been critiqued as a bit \’boxy\’ by styling pundits. And even as downright odd, by some supercar observers!

Configuration-wise, the Apollo was, in fact, far from radical. Its two-seater, mid-engined, rear-wheel-drive set-up was pretty much par for the supercar course. But the Apollo wrung every last drop out of the layout. Its tubular steel frame was rock-solid. The fibre-glass bodywork light as a feather. Suspension was double wishbone all round – with the dampers fully adjustable. They were joined inboard by 6-piston ventilated disc brakes. The Apollo was impressively aerodynamic. On top of its wind-cheating shape, it sported a subtle rear spoiler. Beneath, lay a finely-hewn undertray. Two venturis stretched the length of the car. They generated huge amounts of downforce. The Apollo\’s engine dictated that. The turbocharged 4.2-litre Audi V8 produced 641bhp in base form. That was upped to 690bhp by the sport version of the motor. There was a third engine option – tuned specially for racing. Top speed – even in standard trim – was 224mph. 0-60 appeared in just 3s.

The Apollo, though, did have its docile side. Controls were power-assisted. The V8 grunt was manageable for most drivers. And cruising was a breeze. Supercar-style gull-wing doors allowed easy access. Compared with many a highly-strung rival, the Apollo was user-friendly. Its cabin was roomy and relaxing. Four-point safety harnesses were standard. So, in many ways, the Gumpert Apollo was a real-world runabout, rather than a star-chasing retro rocket. Albeit, one in a suitably space-age skin!