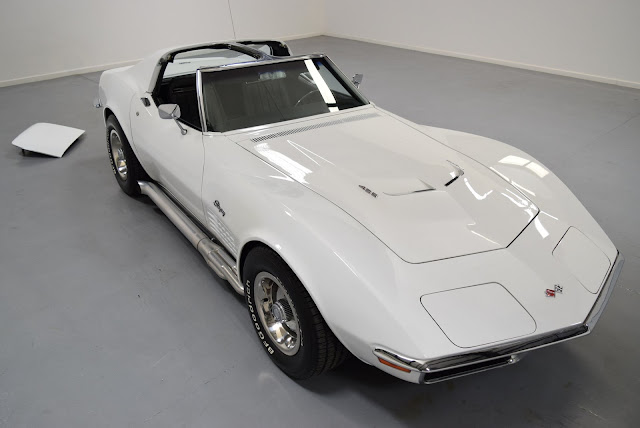 The Chevrolet Corvette Stingray was released in \’63. \’Stingray\’ was a fitting name. For – in careless hands – the car could indeed unleash a fearsome sting, from its sweetly-shaped fastback tail. Its avant-garde fibreglass body made the Stingray a lot lighter than it looked. Its kerb weight was just 3,362lb. Combine that with 340bhp – from a small block high compression V8 – and the result was a powertrain that required respect. Even more so for the fuel-injected 360hp version – available as a $430 optional extra.

The Stingray\’s free-flowing form was inspired, in part, by Chevrolet\’s Mako Shark 1 \’dream car\’. Dream cars were just that. Conceptual exercises – on display at auto shows – they were never intended to traverse highways. Rather, their brief was to work buyers up into a fever-pitch of excitement. Their acme was the \’50s. During that space-obsessed decade, sci-fi was the source of many a fantasy-drenched design prototype. Another GM car key to the Stingray\’s development was \’57\’s Q-Corvette – designed by Bob McLean. The Stingray Special – Bill Mitchell\’s racing project – was also instrumental. Those machines fed into \’59\’s XP-720 – a GM experimental model. From that, it was a short hop to the Stingray production car.

The Stingray was dubbed the \’Coke bottle\’ – on account of its hour-glass shape. Andy Warhol – who knew a thing or two about coke bottles – would have loved that. Designer Larry Shinoda refined those illustrious contours into something suitable for road use. Pete Brock was an able assistant. Bill Mitchell – head stylist at GM – owned a Jaguar E-Type. And that British-made sports car, too, was a clear influence on the Stingray. The latter, though, could only have been made in the US. American to its apple-pie core, the Chevrolet Corvette Stingray summed up the States. On a sunny \’60s day – with the convertible version\’s top down – driving must have seemed like the stuff of heaven!