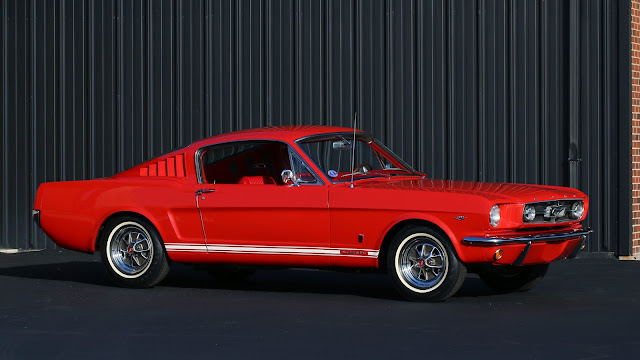 When the Ford Mustang muscle car was first unveiled – at \’64\’s New York World Fair – it triggered a tidal wave of excitement. Thereafter, it became one of the fastest-selling cars in history. It took the Mustang just two years to pass the million sales mark. Lee Iacocca was the whizz-kid Ford executive who conceived the car. It had Sixties all-American looks, straight out of the crate. But, the real beauty of the Mustang – at least, for aficionados – was its long list of extras. Everything, from the engine and gearbox – to suspension and braking – was ripe for user input. Trim options were legion!

And if all you wanted was to cut a dash in your new Mustang, the straight-six motor was more than sufficient. However, if performance was more up your street, a V8 was available. Power outputs went from 195 to 390bhp. If your Mustang was towards the top end of that range, the optional front disc brakes were a wise choice. Standard suspension suited most drivers. It comprised coil-spring and wishbone up front – and a beam axle on leaf springs at the rear. Naturally, a stiffer set-up was there, if needed. Gearbox options were a 3-speed auto, or a 3/4-speed manual.

At full gallop, the Mustang made 130mph. If you wanted more, there was the Carroll Shelby model – with added muscle! A road/race hybrid, it was based on the GT350 fastback. Subsequently, it grew into the 7-litre GT500. By then, it was pummelling out 425bhp. The most iconic Shelby Mustang of all has to be the GT390. It was Steve McQueen\’s co-star in the \’68 film Bullitt. Thanks to that iconic movie, \’pony cars\’ were hot to trot. Rival manufacturers fell over themselves to build their own take on the trend. But, nothing cut the Mustang mustard quite like the original. And that included Ford\’s own updates. Later versions – with added flab – lacked the simple, strong styling of their predecessors. For many an owner, the Ford Mustang was their entrée into the American Dream. Waking up was not an option!