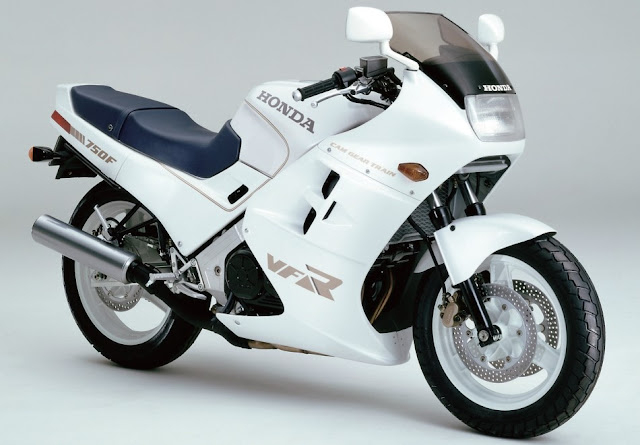 The Honda VFR 750F was about as versatile as a motorbike gets. Indeed, it is often cited as the ultimate all-rounder. The VFR played footsie with perfection … then improved on it! Fast, fine-handling – and styled with finesse. What more could a motorcyclist want?

In engine layout terms, the Japanese in-line four had the market pretty much covered. Until the VFR arrived, that is. Its water-cooled, 16-valve V4 was to prove a more than viable alternative. The motor\’s 100bhp output gave a top speed of 150mph. Sweet stats, by any standards! Combined with that, the VFR\’s 460lb dry weight was reasonably slim for a bike of its size. Plus, the VFR was fitted with a sturdy twin-spar aluminium frame. That was state of the art chassis technology, at the time.

As if all that were not enough – the VFR impressed visually, too. Not only did its bodywork sear through air, but the paintwork was sprayed to last. Hondas have long been known for their build quality. Deftly designed ducts sat by discreetly drawn graphics. Neat tucks and folds were the order of the day. Sales-wise, the VFR was a banker from the off. And Honda needed it to be. The VFR\’s predecessor – the VF750 – had damaged the Japanese giant. It had taken reliability issues to another level! Technically, then, the VFR 750F more than restored bikers\’ faith in Honda. As a bonus – it did so in impeccable style!