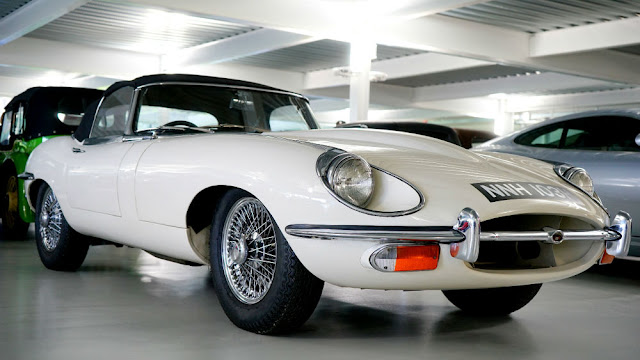 The Jaguar E-Type is one of the most recognisable sports cars of all time. Logically enough, its shell was derived from the D-Type. A production racer, par excellence, the D-Type had been a multiple Le Mans 24 Hours winner. In large part, that was due to its slippery shape. Like its forebear, the E-Type cleaved quickly through air. After all, it pretty much wrote the book on long, low and sleek. Road-holding was also a forte. Notwithstanding its cross-ply tyres being Kate Moss thin, hard cornering induced nary a wobble. The E-Type was a technological trendsetter. Its unibody construction helped make it lighter and more robust than the competition. Its disc brakes – and all-round independent suspension set-up – made it safer and more agile. A rack-and-pinion steering system only ramped up the car\’s smiles per mile quotient.

The E-Type was a Sixties icon. Anyone who was anyone wanted one … as well as many who were not. Rock stars and footballers were especially susceptible to its charms. The E-Type, though, transcended celebrity. When exhibited at NY\’s Museum of Modern Art, it became a design classic in its own right. Malcolm Sayer was the man who had drawn such illustrious bodywork. Built in Coventry, England, E-Type production lasted from \’61 to \’75. On the day of its launch, no less a critic than Enzo Ferrari described it as \’the most beautiful car ever made\’. A string of prestigious automotive publications found themselves agreeing with him. Doubtless, MoMA had taken note.

E-Type power was provided by Jaguar\’s 3.8-litre XK engine. Though a bit long in the tooth, even then, the venerable motor could still pack a punch. The gracefully rising contours of the E-Type\’s bonnet were practical – as well as aesthetic. They were there, first and foremost, to accommodate the dimensions of the XK. The resulting top speed was around 150mph. 0-65 mph came up in less than 7s. The Jaguar E-Type, then, merged cooler than cool lines with prodigious poke. A shortlist of items defining \’Swinging London\’ would simply have to include the \’E-Type Jag\’, darling!