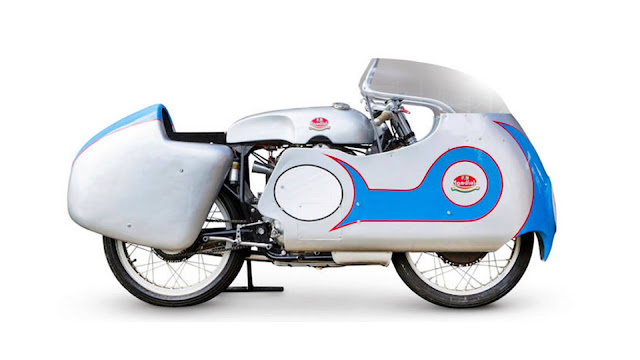 The Mondial 250 GP was a unique piece of performance kit. Motorcycle manufacturer FB Mondial was run on a shoestring, compared with some of its more mainstream rivals. They included MV Agusta and Ducati. But it had entrepreneurial spirit by the bucketload. Bespoke to the core, its products were masterpieces of creative engineering. Founded in \’29 – by five Boselli brothers – Mondial Moto was based in Lombardy, Italy. Bike racing was in its blood!

Though small, the Mondial race team was a serious player. After all, the great Mike Hailwood successfully campaigned Mondial 250s – in \’59 and \’60. A decade or so before that, Mondial machines won the first three 125cc World Championships. The opener was in \’49. In \’57, Mondial won both 125 and 250cc GP series. So, no slouches, for a relatively underfunded équipe!

Such motorsport feats, of course, do not come cheap. Ultimately, Mondial were unable to sell enough roadsters to foot the competition bill. Sadly, therefore, they were forced to retire early from racing. Mondial, as was, ceased trading in \’79. Since then, they have enjoyed something of a renaissance – and, indeed, are back in business at this point. And their classic bikes – resplendent in silver and blue livery – still circulate around racetracks. After all, the Mondial 250 GP harks back to a time when beauty was built to last!