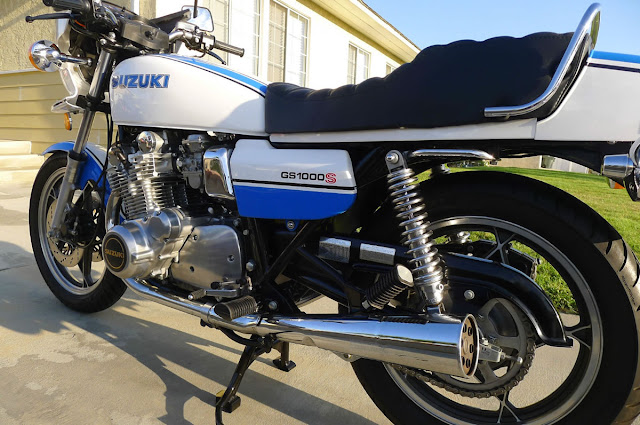 The Suzuki GS1000 was not blessed with the most exotic styling, ever to have flowed from a designer\’s pen. Indeed, visually, it was straight out of Studio Old Skool. But what the GS lacked in aesthetics, it more than made up in the technical stakes.

The heart of the GS was its in-line four-cylinder engine. We are talking \’classic Jap\’ here. The bike cruised to a top speed of 135mph. Cornering was consistently solid and stable. Its frame was robust, suspension adjustable and tyres wider than normal for Seventies superbikes. So – properly maintained and adequately set up – handling was never an issue. When the time came, its dual front disc brakes were more than capable stoppers.

Anyway, beauty is, as they say, in the eye of the beholder. For some, the GS was a beautiful bike, precisely because it was big and basic – not despite the fact. \’That\’s the way a motorcycle should look\’, they would have said. \’Forget about frills \’n\’ flimflam!\’ Heavy metal over cosmetic plastic. So, the Suzuki GS1000 was something of a wolf in sheep\’s clothing. On the surface, it seemed a placid enough beast. Even slightly staid, perhaps. But rider beware – if you twisted its throttle!