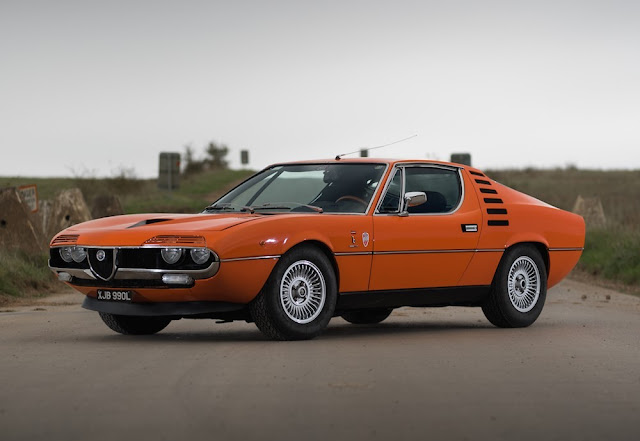 Montreal – in Quebec, Canada – hosted the \’67 Expo show. It was there that the Alfa Romeo Montreal made its début. Designed by Marcello Gandini, there was never a doubt that the car would turn heads. Gandini\’s employer – coach-builders Bertone – built the body. For all that, the Montreal did not sell in shedloads. But it did give Alfa a much-needed publicity boost. Following its 1970 launch, the Montreal stayed in production for seven years. Ironically, Montreal\’s showrooms were a no-go – on account of the city\’s strict emissions regulations. Not the best of marketing messages!

Performance-wise, the new Alfa lived up to the hype. Its fuel-injected V8 engine gave 132mph. That was quick – particularly since the Montreal was no lightweight. Its motor was taken from the Tipo 33/2 race car … suitably de-tuned for the road. That said, it still made 200bhp. And revved up to 6,500rpm. Torque was abundant throughout.

The Montreal\’s engine, then, was hard to fault. Sadly, the same could not be said of every component. The live axle rear suspension, for instance, was too softly sprung. To the point at which cornering could be compromised. At speed, steering, too, was an issue. Its gearing was set up for a more sedate pace. However, the ventilated disc brakes were fine. Overall – as Grand Tourers go – the Montreal passed muster. Which was important – as GT cars were a new market for Alfa. One thing no one complained about was the car\’s looks. Dubbed the Montreal, it may have been. But – in styling terms, at least – the new Alfa Romeo was as Italian as cars come!