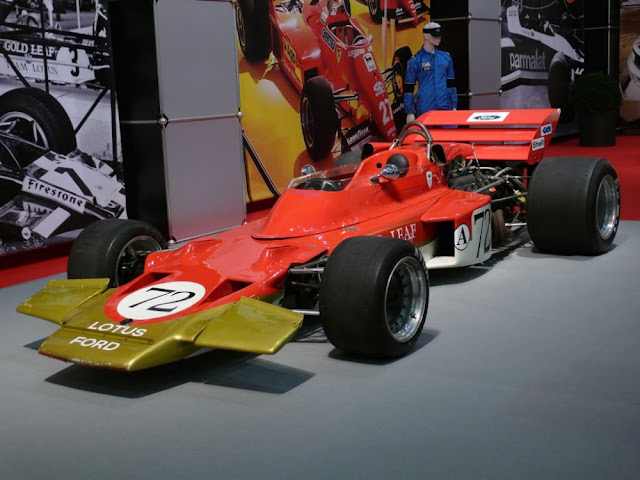 The Lotus 72 had a legendary engine. Lotus had led the way with the Cosworth DFV. Its winning streak started in \’67 – when it was fitted in the Lotus 49. Graham Hill and Jim Clark were the first drivers to reap the rewards. The \’Double Four Valve\’ V8 would go on to become the gold standard Formula One engine. Unfortunately for Lotus, their rivals were quick to seize upon the source of their success. Not exactly unknown in F1! By the end of the \’60s, it seemed like every car in the paddock had a DFV engine. That was great for the sport – since it fostered close, competitive racing. But it was not entirely to Lotus\’ liking. They had acquired a taste for leading GPs. The ubiquity of the DFV was eroding that lead.

Cometh the hour, cometh the F1 car! Hitting the grid with the 1970 season already underway, there was much that was new about the Lotus 72. Most obviously, cigar-shaped bodywork – previously de rigueur – had morphed into a wedge. Inboard suspension and brakes made the 72 more aerodynamic than its predecessors. They also served to reduce unsprung weight. Suspension was via torsion-bar. Oil and water radiators were laterally placed – centralising weight distribution. The result of all this innovation was higher grip levels. F1 handling had come on leaps and bounds.

Lotus had their lead back! Driver Jochen Rindt duly won four races on the spin. He then crashed in qualifying for the Italian GP, at Monza. He was fatally injured. Remarkably, Rindt still went on to win the 1970 World Championship. That is how dominant he had been, up to that point! Team-mate Emerson Fittipaldi likewise took a drivers\’ title – in \’72. Indeed, he was the youngest driver to do so, at the time. He was just 25 years of age. In \’73, Ronnie Peterson – also in a 72 – amassed a record nine pole positions in a season. From 1970 to \’75, then, Lotus ruled the F1 roost. Their early adoption of the Cosworth DFV had paid huge dividends. The Lotus 72 was the chief beneficiary!