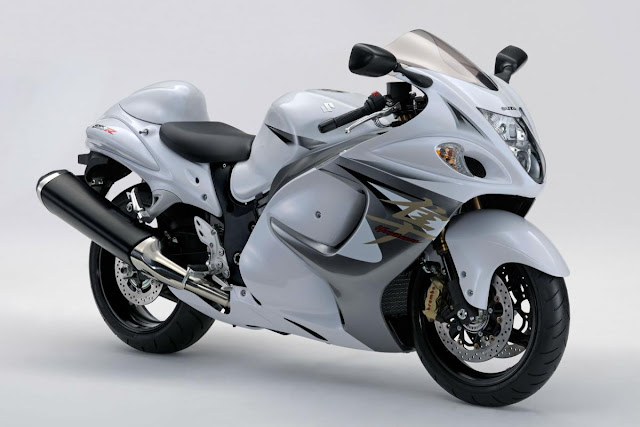 The Suzuki Hayabusa was released in \’99. At the time, the Honda Super Blackbird ruled the motorcycle roost – in top speed terms, at least. From a Suzuki standpoint, that was a stat that needed to change. The Hayabusa is a Japanese bird of prey. No doubt, one which would not object to gobbling down a tasty blackbird or two on its travels!

Suzuki\’s assault on the top speed slot would be a three-pronged affair. The Hayabusa\’s 1,299cc engine was the biggest in a sports bike, up to that point. Its ram air set-up did just that – forcing increasing amounts through the carbs, the quicker the bike went. The result was a high-octane 173bhp. The Hayabusa was also quite light – weighing in at 473lb dry. Not slimline, as such – but less than you would expect for a bike of its size. The third item on Suzuki\’s must-have list was good aerodynamics. The bike\’s bulbous-looking bodywork was not to everyone\’s taste. But – aesthetic considerations aside – it was a lot more slippery than it looked. At any rate, designer Koji Yoshirua\’s primary goal had been to make a strong visual statement.

The Hayabusa\’s 1300 engine was, basically, a bigger version of the GSX-R1100 unit. Each iteration of Suzuki\’s flagship model had refined its core components. So – by the time the Hayabusa came along – the package was pretty well primed. All of which resolved to 194mph, at full chat. That was enough to knock the Super Blackbird off its high-speed perch. Mission accomplished, then, for the Suzuki Hayabusa. As it happens, Yoshirua claims the intention was not to make it the fastest road bike on the planet. But, that can probably be taken with a generous grain of Japanese salt!