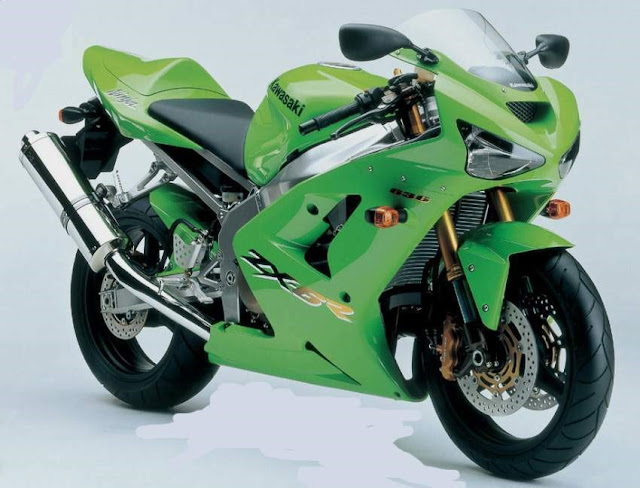 The letter \’Z\’ – on a Kawasaki motorbike – has long denoted high-performance. The Ninja ZX-6R – released in \’03 – was a case in point. A race-bred riot on two wheels, it had a licence to thrill. As uncompromising as bikes come, the ZX-6R made 116bhp. Much of that was thanks to its ram-air system. Top speed was 160mph. Not bad for a 636cc capacity machine. The fact that the ZX-6R weighed in at just 354lb helped account for its awesome acceleration.

When it came to keeping all that power in line, the ZX-6R\’s chassis was well up to the job. Twin radial front brake callipers were there, if needed. They were directly derived from Kawasaki\’s race programme. As were the ZX-6R\’s thinly-padded seats … definitely not designed for comfort! That said – crouched racing-style atop the plot – rider and pillion were well-placed to help steer the beast. The lack of leverage from the stubby \’bars made hanging off through corners a requirement. To some degree, at least. That is an art to be acquired with caution! But – with weight distribution correctly addressed – the Ninja gave high-precision handling.

Just as the letter \’Z\’ can say so much when it is a Kawasaki, so can a colour. Every hue and shade in the spectrum has bedecked a motorbike, at some time or other. But seldom with the impact of lime-green. Since the heyday of the \’Green Meanies\’, the colour has adorned many a production Kawasaki. They were the evil-handling H2R race bikes the firm sent out onto Seventies circuits. Certainly, lime-green suited the ZX-6R. Green has been said by some to bring bad luck to a motorcycle. If so, it was not the case with the Ninja. The ZX-6R restored Kawasaki\’s status as sports bike supremos. \’Z-Bikes\’ have long been integral to the marque. Fast, dynamic, exciting? Always. Zzzzz? Never!