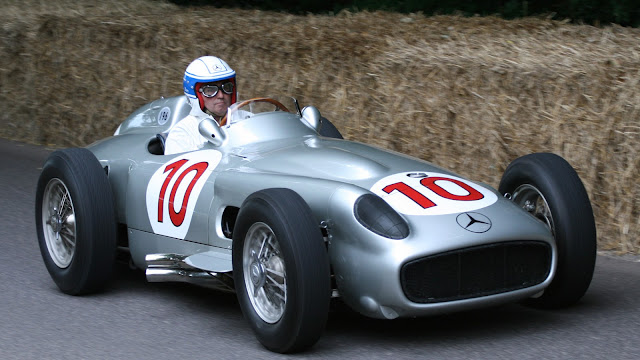 In the mid-\’50s, the W196 marked a welcome return to GP racing for Mercedes-Benz. As it was, they would only be back for a couple of years. In \’54 and \’55, Mercedes left the opposition for dead. No great surprise, really. They did, after all, have Juan Manuel Fangio and Stirling Moss on their books. Behind the wheel of a W196, both men were in their element. Past masters of their craft, they now had machines to match.

But, there was more to the W196 package – even than Fangio and Moss. Engineer Rudolph Uhlenhaut was likewise at the peak of his powers. While rival teams\’ technicians trod water design-wise, Uhlenhaut took risks. No parts barred streamlining was key. At first, that included the wheels. Originally, they were fully enclosed. As a result, however, handling was wayward – especially, near the limit. No worries! Uhlenhaut uncovered the wheels again – and the W196 was back to its sure-footed best.

Fangio won first time out in the new car – at the \’54 French GP. That was the first rung on the ladder to his second driver\’s title. That season, there were just two races the W196 did not win. The \’55 campaign arrived – and it was the same story. Well, almost. This time around, there was only one race victory it did not take! Sure enough, Fangio soon held aloft his third World Championship trophy. Uhlenhaut\’s car was packed with cutting edge spec. Its straight-eight engine, for instance, was rotated through its \’default\’ position. That gave a lower centre of gravity – optimising handling. The motor\’s valve-gear was desmodromic. Valves were opened and closed via cams. Having no bouncing springs improved efficiency. Plus, it was fuel-injected – almost a decade before that became standard GP practice. In terms of engine and bodywork, Uhlenhaut had gambled and won. Monte Carlo or bust, so to say! A consummately-crafted car, and – in Fangio and Moss – two of history\’s greatest drivers. Truly, the Mercedes-Benz W196 was a motor racing marriage of man and machine!