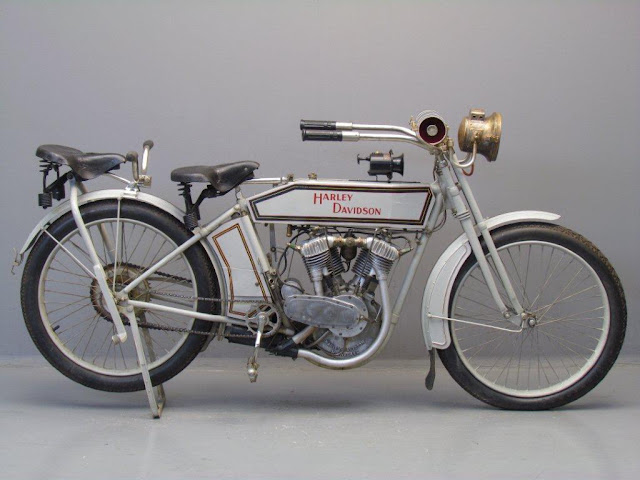 Strange to think that the globally renowned brand-name that is Harley-Davidson started life in a small shed in Milwaukee. That was in 1903. After a few faltering start-up steps, the fledgeling firm found its feet in \’13. The first Harleys to emerge from the shed – and take to the street – had a single-cylinder engine. The Model 9E, though, came with a 45° V-twin. At that point, not even co-founders William S Harley and the three Davidson brothers, knew just how iconic that engine would turn out to be. Harley-Davidson – along with bourbon whiskey distilleries – was what made Milwaukee famous. The 9E\’s 1,000cc motor kicked out 10bhp. That gave a top speed of 60mph. There are modern-day wags, of course, who claim that not a lot has changed!

As a rule, Harley-Davidson is not associated with racing. Since its primary legacy is a long list of laid-back cruisers, that is not surprising. Drag-strips have been more of a Harley domain – where their torque-rich V-twin engines can be given free rein. The firm has long competed at race circuits, too, though. The first Harley-Davidson factory team was formed as far back as \’14. Dubbed the \’Wrecking Crew\’, the équipe battled it out with the likes of Indian, Merkel and Exelsior. Such events garnered Harley much-needed early publicity. They were the perfect showcase for their 8-valve V-twin motorcycles.

By \’19, Harley\’s \’Bikes Produced\’ column numbered 22,000. Added to that tally were 16,000 sidecars. The big time beckoned! Henry Ford, however – and his affordable cars – were increasingly a thorn in their side. The Model T, in particular, put paid to many an American motorbike manufacturer. Indeed, Harley\’s own sales halved. Milwaukee\’s finest, though, would survive Ford\’s four-wheeled onslaught. It was fortitude to which millions of bikers would be later indebted. For – while the marque has long had its fair share of detractors – it was Harley-Davidson which really put motorcycling on the map. The marketing map – as well as the geographical one – that is. The Model 9E was an important staging-post. As for that shed in Milwaukee … mighty oaks do indeed from little acorns grow!