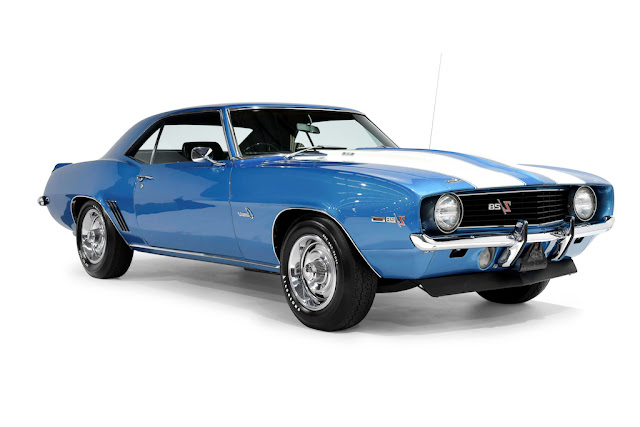 The Chevrolet Camaro was born out of necessity. Sales of the Ford Mustang were going through the roof. GM needed a fix for that – and fast! Rolling to the rescue came the Camaro. Key to its success was its \’Coke bottle\’ styling – by Bill Mitchell. The Z28, especially – with its duck-tail rear spoiler – rivalled the Mustang for glamour. GM was back on track. 220,000 Camaros were shifted – in the first year alone. Buyers had a choice of V6 or V8 engine – as well as a variety of tuning options. The most uncompromising package was the SS (Super Sport). Less extreme – and more popular – was the RS (Rallye Sport). These are now the most collectible Camaros.

The Seventies ushered in an all-new Camaro. It featured monocoque construction. The new model\’s looks may not have been as exotic as the original – but it still stacked up as a cohesive design. Crucially, it was slimmer than the new Mustangs. Sales of \’70s Camaros peaked at close to 2,000,000. GM were happy bunnies again. Though down on power compared to the \’60s versions, it was clear that Stateside motorists had taken the Camaro to their hearts. When a car starts to symbolise \’the American dream\’, things are definitely on the up!

They say competition improves the breed. The Camaro was a case in point. Had it not had the Mustang as a rival, it is unlikely the Camaro would have soared to the heights it did. In the end, it became a car which was difficult to fault. With a top-spec speed of 125mph, performance was sorted. Design-wise, it was out of the top drawer. In short, it got just about everything right. The Mustang, not so much. It rather lost its automotive mojo, over time. While the pony car developed a paunch, the Camaro kept a solid six-pack. Ultimately, of course, both were great American automobiles. Stone-cold classics of their muscle car kind. Some say the Chevrolet Camaro got it on points. If so, it was because it had more styling stamina in its tank, as the years went by.