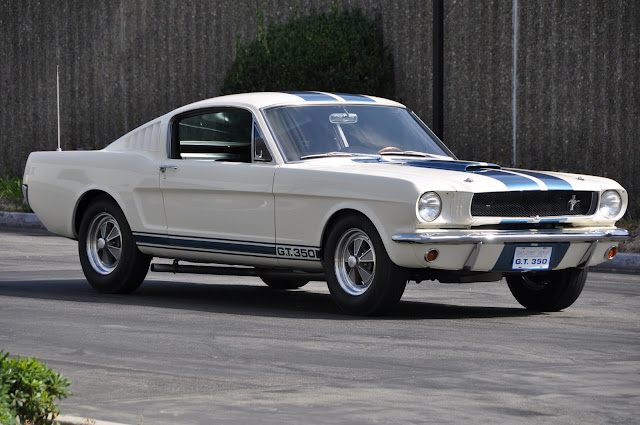 As motoring luminaries go, they do not shine much more brightly than Carroll Shelby. So – in \’65 – when the erstwhile racer trained his tuning sights on the Ford Mustang, the sports car community sat up. The first-model Mustang had been released the previous year – to great acclaim. It had impressed in every area … except one. In performance terms, the Mustang underwhelmed. Enter Carroll Shelby!

Styling-wise, the Mustang was fine. So, that was left alone – apart from new side-exhausts and stripes. Shelby headed straight for the engine – a Cobra 4.7-litre V8. He already knew a thing or two about it. He had, after all, been the catalyst for the AC Cobra. When Shelby picked up his spanners, the Mustang\’s V8 made 271bhp. Ford had already uprated the original spec. Shelby, though, was sure there was more. He was right. By the time he put down his spanners, output had risen to 306bhp. That came, in the main, by modifying the manifolds. Though a Holley carburettor certainly helped. Top speed had risen to 149mph … with a 0-60 stat of 6.5s. Ensconced in their LA workshops, Shelby and his team had turned a meek and mild Mustang into a muscle car!

But, it would not have been a \’Shelby\’ without racing attached. It came in the form of the SCCA B-Production road-race series. The Shelby GT350R duly hit the grid. And went on to take the \’65, \’66 and \’67 titles. The R dished out 360bhp. While the roadster was not quite in that league, it was no slouch. Koni suspension was suitably solid. The chassis was well up to taking the strain. Front discs – and rear drums – provided safe and assured braking. Transmission was 4-speed. Carroll Shelby had done it again. Cut from the same cloth as the AC Cobra, Ford\’s GT350 was already a thoroughbred sports car. And when a class act like Shelby got a hold of it, sparks were always going to fly. In a perfect trajectory, of course!