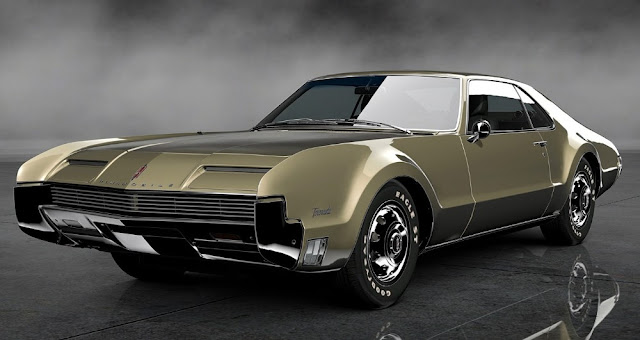 Of all the cars to have been made in Detroit, the Oldsmobile Toronado must be one of the biggest. This two-ton leviathan hit the road in \’65. The Toronado was the first mass-produced American car with front-wheel drive. As a result, it handled better than its rivals. 60% of the Toronado\’s weight was over the front wheels. Torsion-bar suspension sealed the deal, stability-wise. Plus, two of the four tyres Firestone made especially for the Toronado. They featured stiffer sidewalls – and extra grip. The wheels were slotted – to cool the finned brake drums.

Power was provided by a 7-litre V8. Dubbed the \’Rocket\’, the engine produced 385bhp. That gave the Toronado a top speed of 130mph. The motor was mated with a 3-speed Hydra-Matic gearbox. Rubber insulation smoothed the V8 vibes. The mill sat in a solid, perimeter-framed chassis.

The Toronado was ahead of the game in its looks, too. Clean and vibrant lines set it apart. Its headlights\’ electric flaps were a sweet styling touch. Alec Issigonis – designer of the Mini – said large engines could never be successfully twinned with FWD. Automotive giant though he was – the Oldsmobile Toronado proved him wrong!