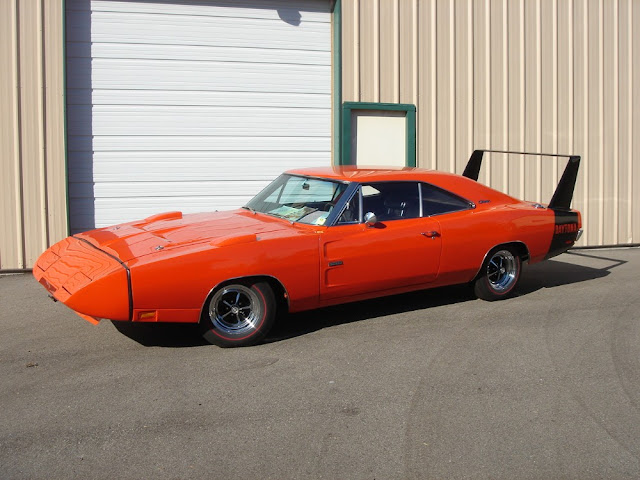 The Charger Daytona 500 was Dodge\’s response to Ford dominance. Specifically, in the form of NASCAR racing. The Charger car had been competitive in terms of outright power. But, it had been held back by an excess of speed-sapping drag. The Charger \’500\’ version was an attempt to redress the balance. The Charger\’s nose was duly enclosed. Its rear window fitment now sat flush with its surrounds. Those two changes alone made a big difference. In the \’69 season, the 500 won 18 races. Unfortunately for Dodge, its biggest rival – the Ford Torino – won 30! More was clearly needed. In short order, the 500\’s nose grew 18″. Most noticeably, the car sprouted a huge rear wing. The updated model was 20% more aerodynamically efficient. It was duly dubbed the Daytona. NASCAR\’s tables had turned!

505 Daytona road cars were built. Racing homologation rules required it. Sadly – from a Dodge point of view – they did not sell well. But – just as the showroom dust was starting to settle – TV rode to the rescue. The Dukes of Hazzard series turned the Charger tide. Indeed, for many – in the guise of the General Lee – the Charger was the star of the show. Week after nerve-racking week, the Sheriff seemed in perpetual pursuit of the Dodge-borne Dukes. Though, thanks to its GM Magnum V8 engine – and the 375bhp it provided – the good ol\’ boys were able to stay out ahead! For real-life drivers, there was the choice of a 4-speed manual – or 3-speed TorqueFlite – gearbox. Suspension was by torsion bars, upfront – and leaf springs, at the rear. Respectively, they were connected to disc brakes and boosted drums.

Ironically, the new nose and rear wing – game-changing for the Daytona racer – hindered the roadster. The added weight slowed it down. And it was not travelling fast enough for the aerodynamic package to really kick in. That said – if performance took a tumble – turned heads and double-takes turned up by the shedload. But, it was on the oval banking that the Charger truly came into its own. Buddy Baker, for instance, drove a Daytona to NASCAR\’s first 200mph lap. That was in 1970 – at Talladega, Alabama. The car was, after all, named after one of the most iconic of race-tracks. The Dodge Charger Daytona 500, though, fully lived up to the legend!