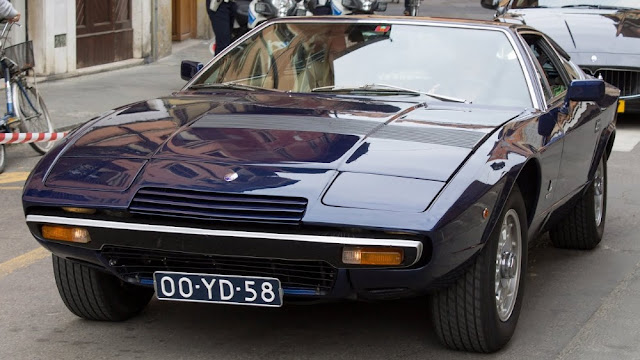 The Maserati Khamsin was the latest in a line of things automotive to reference the weather. Le Mans has a straight named after the \’mistral\’ – the cold wind, blowing through southern France. Ford\’s \’Zephyr\’ namechecked a gentle breeze – which has meandered through many a piece of poetry over the years. Another car, too, played upon the ethereal theme. The Khamsin was a scorching gust of air, which seared through Egypt each summer. Maserati brought in Marcello Gandini – of design house Bertone – to draft the Khamsin\’s super-sharp shape. Its fluid bodywork lines were fabricated from steel. Spanning the back was a glass panel – inside which, tail-lights sat in suspended animation.

The Khamsin was a technological tour de force. Its four-cam V8 engine abutted the bulkhead. Front-engined though it was – with a full tank of gas, weight distribution was 50/50. The motor was an all-alloy marvel. Its 320bhp gave a top speed of 153mph. Torque output was 354lb/ft – at 4,000rpm. The V8\’s powerband stretched from 800-5,500rpm.

When the Khamsin entered production – in \’74 – Citroën were still a part of Maserati. A year later – and they were gone. The Khamsin, though, felt the full hydraulic force of the French giant. The steering, brakes and clutch – plus, pop-up headlights and driver\’s seat adjustment – were all Citroën-controlled. Rear suspension was double-wishbone. Only the Khamsin\’s dashboard let the design side down a tad. Its haphazard array of dials and switches clashed with the simple elegance of the exterior. Unveiled at the \’72 Paris Show, the new Maserati was as stylish as you like. Yet, it was also practical. The huge torque reserves of its V8 powerplant further boosted its already abundant carrying capabilities. And, on top of all of that – as its name implied – the Maserati Khamsin went like the wind!