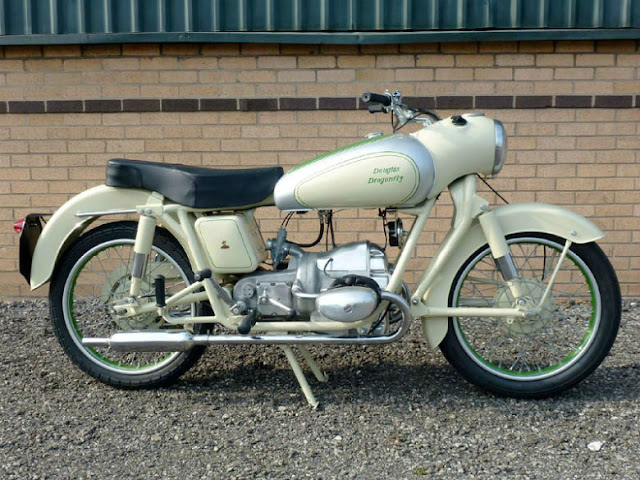 The Douglas Dragonfly broke the motorcycle mould. BMW is now almost synonymous with the flat-twin layout. Other marques, too, though, have used that venerable engine configuration. Not least, Douglas. The firm was based in Bristol, England. Its early models saw the motor fitted inline with the frame. The two pistons went at it hammer and tongs – \’punching\’ their way fore and aft. The Dragonfly, though, saw them slung transversely across the frame – à la BMW \’Boxer\’. In any case, the Dragonfly made good progress – cruising at around 60mph. Beyond that optimal speed, however, performance tailed off dramatically. Ultimately, that would lead to the Dragonfly\’s decline.

Design-wise, the Dragonfly was on solid ground. If anything, slightly too solid. Does the way in which the headlamp nacelle flow into the fuel tank look a bit like a dragonfly? Possibly! Certainly, the Earles forks – and robust rear shocks – visually complemented each other. And – above them – the bike\’s logo was elegantly scripted. The Dragonfly\’s flat-twin powerplant was itself impressively wrought.

In \’23, Douglas won at the TT. It was in the sidecar category. Freddie Dixon did the driving. Again, that historic outfit\’s \’boxer\’ motor was installed inline. The year before, on the \’island\’, a Douglas solo racer had been fitted with a delicate-looking little disc brake. Douglas, then, were innovating – technically and stylistically. And – when it comes to nomenclature – the Douglas Dragonfly must be one of the most poetically-named bikes of all time. Buzzin\’, basically!