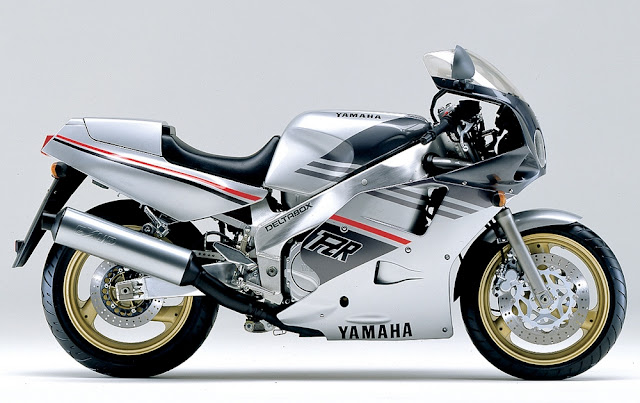 \’Genesis\’ is one heck of a tag to give a motorbike. But, that is what the first version of the Yamaha FZR1000 was called, when introduced in \’87. No pressure, then! In the beginning, there had been the FZR1000 race bike. That begat the Genesis roadster … which multiplied in great profusion. The first follow-up model was the Exup – or Exhaust Ultimate Powervalve. By that point, the FZR1000 was already selling in shedloads.

The FZR topped out at a dizzying 168mph. Output was 140bhp. It tipped the scales at a scant 461lb dry. \’Upside-down forks\’, on later models, reduced unsprung weight – and thereby improved handling. A 17″ front wheel – and radial tyre – helped raise the roadholding bar. At the back, a rock-solid swingarm pivoted on an aluminium twin-spar Deltabox frame. The engine\’s electronic Exup system extended the FZR\’s powerband into the middle of the rev range.

The FZR was one sweetly-styled sports bike. The twists and turns of its bodywork went every which way. Rather than being a cause of confusion, though – in this case, it \’worked\’. With the FZR1000, then, Yamaha gave a blank sheet to its engineers/designers. They clearly seized the invitation to move the motorcycle onto new ground!