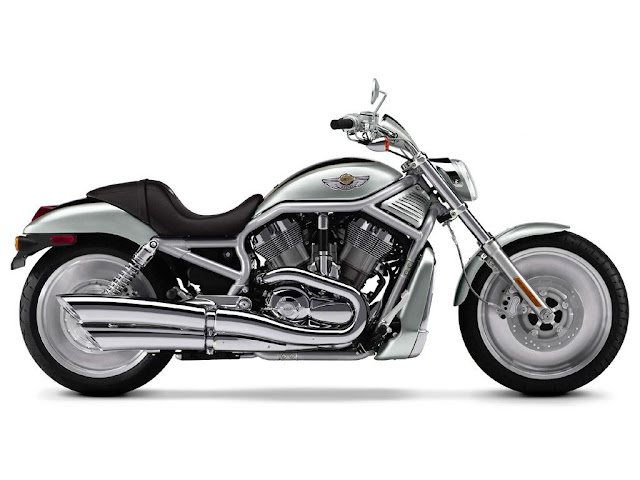 By Harley-Davidson standards, the V-Rod verged on the radical. It was clearly a cruiser – in true Milwaukee style. But, it was a different kind of cruiser to what Harley fans were used to. The V-Rod VRSC – V-Twin Racing Street Custom – had superbike-like performance. Top speed was 135mph. Handling-wise, things were just as impressive. In a straight line, the V-Rod was ultra-precise. That was only to be expected – given its long wheelbase. The front forks were raked out to 38°, after all. But, whereas in the past, cornering would then have been compromised, the V-rod\’s cutting edge engineering saw it sail through twists and turns. And that with a dry weight of 594lb.

Visually, the V-Rod was striking, to say the least. A full-on \’silver machine\’, Harley did not stint on aluminium. This was no \’iron horse\’. Rather, the V-Rod was an object-lesson in à la mode metalwork. Solid disc wheels set off intricate frame tubes. An elegantly-shaped tank morphed into a slanted headlamp. The clean lines of the pipes blended in perfectly. The 1130cc V-twin engine was a design delight in itself.

The 115bhp motor had its roots in Harley\’s VR1000 race bike. Porsche Engineering assisted in its development. In marketing terms, Harley declared this Evolution engine a \’Revolution\’! It boasted twin overhead camshafts and four valves per cylinder. Water-cooled – and with a 60° \’V\’ – it took Harley performance to a whole new level. The venerable old pushrod motor was history. Harley-Davidson riders could not believe their luck. They had long been on bikes that ruled the roost, looks-wise. Well, in their opinion, at any rate. Now – with the advent of the V-Rod – they were competing technically, too. Talk about having your motorcycle cake and eating it!