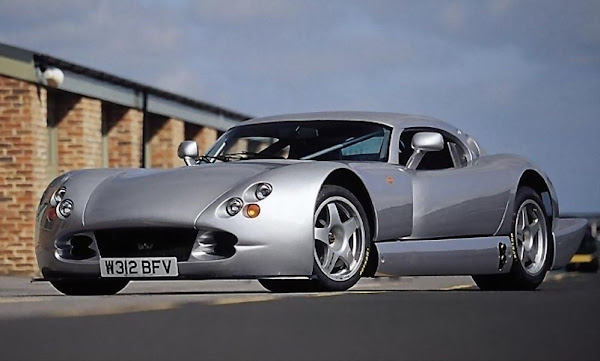 The TVR Cerbera Speed 12 further developed the Project 7/12 prototype. The latter was named for its 7.0-litre V12 engine. The 7/12 had wowed the crowd at the \’96 British Motor Show. It did the same at racetracks. Hardly surprising really – since 0-60mph arrived in around 3s. In the debit column, the 7/12 was far from forgiving, handling-wise. That was all to the good, so far as motor racing fans were concerned. The combination of the 7/12\’s prodigious output – and hairy handling – made for some splendid spectating. In effect, the 48-valve V12 was two 6-cylinder motors combined. A 6-speed \’box did what it could to transition power smoothly to the rear wheels. All of that was wrapped up in a TVR Tuscan modified chassis. With 800bhp flowing through what was essentially a souped-up sports car, the 7/12 was the race-goer\’s gift that kept on giving.

But, there was more to come from the Project 7/12. In 2000, a new version was unveiled. Rebranded as the Speed 12, it was everything its predecessor had been – and more! TVR had used the McLaren F1 supercar as a benchmark. Which pretty much said it all. Flat-out, the F1 did 231mph. The Cerbera Speed 12 was about to top that. It was reputedly good for 240mph. That was in no small part down to the Speed 12\’s weight – or lack thereof. TVR engineers had pared it down to just 1,000kg. Not only was the Speed 12\’s bodywork breathtaking to behold – it was hyper-light, too. Optimal aerodynamics, then, were a gimme.

Sadly, just three Speed 12s were built. Without doubt, TVR – based in Blackpool, England – had built awesome performance into the car. But on the open road, that could be a double-edged sword. In the hands of the unwary, such poke might prove fatal. \’TVR\’ had been founded by TreVoR Wilkinson. Now, though, a new man was at the helm. CEO Peter Wheeler was a seasoned and skilled racer of the company\’s products. If anyone knew the capabilities – and potential perils of the car – it was him. Wheeler felt that the Speed 12 was simply too powerful to take to the roads. It was rumoured that the car might compete at Le Mans – which rather reinforced his point! After all, the TVR Cerbera Speed 12 served up some 960bhp. As for the roadster, a price tag of £188,000 had been mooted. Some prospective buyers might well have seen that as a steal!