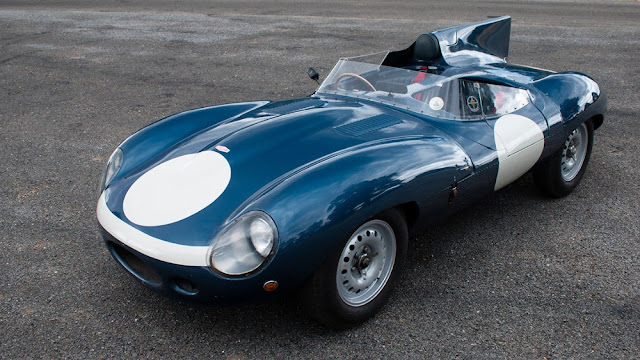 In the mid-Fifties, the Jaguar D-Type was motor racing\’s top dog. It won consective Le Mans 24 hour races – in \’55, \’56 and \’57. At the \’57 event – come the chequered flag – D-Types occupied five of the first six places. Fair to say, then, it was their day. Not only that – but they were all privateer entries. It would seem the famous French circuit was a second home to Jaguar at the time. Silverstone, of course, being their primary stamping-ground.

As was apt, the Jaguar C-Type blazed the trail. \’C\’ stood for Competition. Jaguar turned to their XK120 sports car. It was a proven success – on both road and track. William Lyons was boss at Jaguar. He opined that – when it came to racing – pure production cars could no longer cut it. A dedicated Jaguar motorsport division was required. As a result, a race-spec body kit was grafted onto the XK120 chassis. The C-Type subsequently won twice at Le Mans. In doing so, it demonstrated its new-fangled disc brakes were the way to go. The race department was paying for itself already!

The D-Type was Jaguar\’s first full-on racer. It hit the grid in \’54. From the get-go, it was clear Jaguar had been busy. The flowing curves of its bodywork came courtesy of Malcolm Sayer. The stabilising fin at the rear looked like it had been lifted from a land speed record car. Beneath it sat a \’monocoque\’ chassis. Disc brakes were fitted all-round. They had been jointly developed by Jaguar and Dunlop. The front-mounted 6-cylinder engine fed 250bhp to the rear wheels. Top speed was 175mph. In the \’54 Le Mans race, a D-Type harried a Ferrari all the way to the flag. Though Ferrari fended it off, it had a much bigger motor. When it came to the \’press conference\’, Jaguar no doubt chalked that up as a moral victory! The D-Type was still available to privateer drivers, and race wins were duly recorded around the world. Coventry, England was Jaguar HQ. The city was now well and truly on the automotive map. The D-Type was a racer, rather than a roadster. To that extent, it changed motor racing. No longer were competition cars within easy reach of the average driver. Motor racing would become less accessible. Few cars, then, have moved motorsport on more dramatically than the Jaguar D-Type!