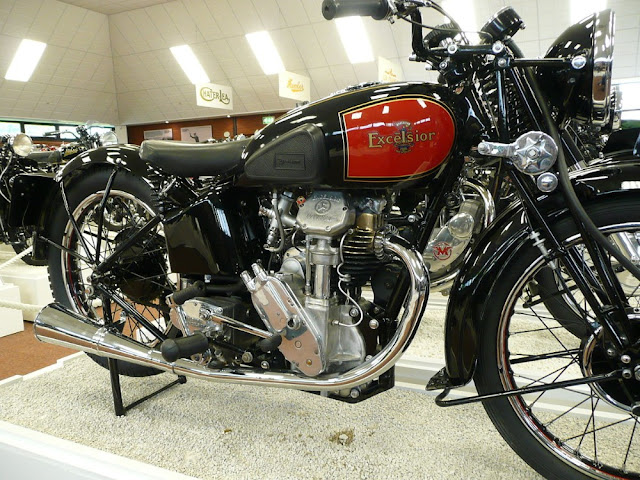 Excelsior was the first British motorbike manufacturer. The company\’s best-known machine, the Manxman, was named after the TT – Tourist Trophy. That being the ultimate devil-may-care road race – through the picturesque scenery of the Isle of Man.

In \’33, Excelsior took the Lightweight TT title. Overnight, the English firm became a motorcycling name to be reckoned with. The bike which achieved said feat was dubbed the \’Mechanical Marvel\’! Keen to capitalise on their success, Excelsior conceived a racing replica roadster. At the last, though, the project was cancelled. Excelsior were worried about long-term sales. They feared its engine might prove too complex for Clubman-level \’tinkering\’!

While that eleventh hour change of heart was a loss to amateur racing, it was a boon to road riders. Instead of the \’race rep\’ they had planned, Excelsior served up the more orthodox Manxman. Its single overhead camshaft motor came in 250, 350 and 500cc versions. For those so inclined, a bit of light tuning sorted it for the track. In standard trim, it was more than adequate for country lane heroics. In short, the Excelsior Manxman pleased everyone. In so doing, it signalled the finest hour for an historic marque!