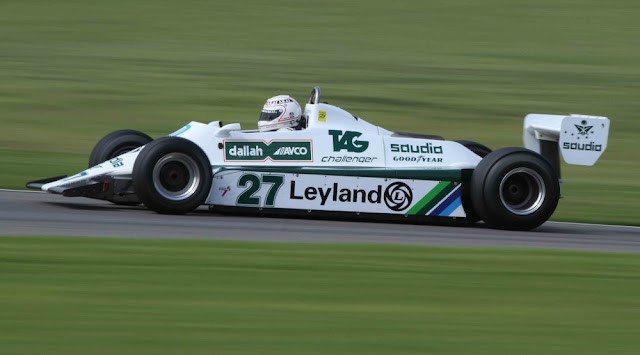 The FW07 moved Williams into F1\’s major league. Its precursor – the FW06 – had already nudged the team firmly in that direction. Patrick Head was chief designer. Key to the FW06\’s success was \’ground effect\’. Lotus first introduced this piece of GP game-changing wizardry. Aerodynamic skirts \’sucked\’ the Lotus 78 to the tarmac. That groundforce helped the car corner. So much so, that it had rendered the Lotus nigh on unbeatable. But, the 78 had a chink in its armour. The car\’s structural strength – or lack of it – limited the amount of downforce that could be used. Fast-forward to Williams again – and the FW07 featured a robust monocoque chassis. In layman\’s terms, it could take as much \’vacuum-suck\’ as the venturi could chuck at it!

The \’79 season was well underway by the time the FW07 was launched. It did not take it long to get up to speed, however. Come the mid-point of the campaign – and the FW07 was flying! Clay Regazzoni took its first win. Fittingly, for Williams, it was at Silverstone, England. By season\’s end, Alan Jones had added a further four wins to the tally. Next time around – in 1980 – and the FW07 was there at the start. Jones went on to win Williams\’ first World Championship. In doing so, he pipped Nelson Piquet to the post – in his Brabham BT49.

In \’81, it was more of the same. Carlos Reutemann topped the podium for most of the season. \’82, though, saw the curtain come down on the FW07. The car\’s final Act was staged at Long Beach, California. Keke Rosberg finished second – giving Williams another world title. Ground effect – in the form of the FW07 – had generated more than just downforce. It had provided Williams with their first – but not last – taste of F1 dominance!