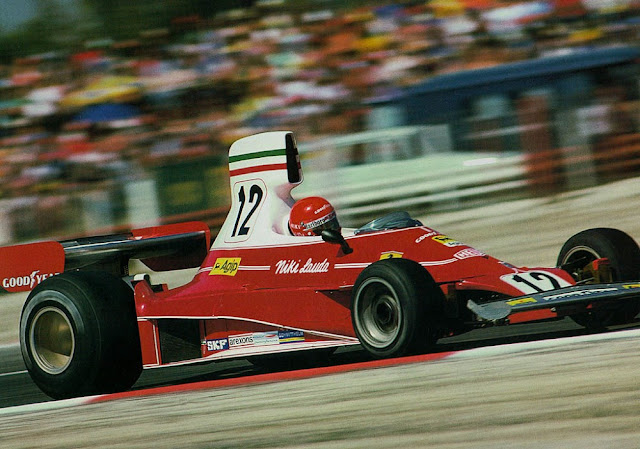 The 312T won the \’75 F1 World Championship. Ferrari were cock-a-hoop. It had been eleven long years since the last one. Having the great Niki Lauda as driver helped, of course. But, Lauda would have been first to acknowledge the contribution of a fellow member of the Ferrari team. Namely, Mauro Forghieri – who designed the 312T\’s engine.

The Ferrari flat-12\’s motor had slimmer bores than those of the V-configured layouts of other teams. That allowed them to rev higher. Increased engine speeds meant more horsepower. It also meant more fuel consumption – so the 312T hit the grid heavier than its rivals. Thus, it fell to Ferrari\’s strategists to erase that handicap as the race wore on. They obviously made a good fist of it. Lauda won three consecutive races – 5, 6 and 7 – in Monaco, Belgium and Sweden. He had added two more by season\’s end. Deservedly, then, he took his first World Championship. Small wonder he described it as \’the unbelievable year\’! To be fair to their competitors – not least, Brabham – Ferrari\’s car was head and shoulders above the rest.

Engine man Mauro Forghieri\’s masterstroke was his positioning of the 312T\’s gearbox. The horizontally-opposed flat-12 set-up meant the motor\’s mass sat lower. The result was better handling. Still a bit twitchy – but a big improvement on the Ferrari 312B3\’s understeer. Forghieri took weight distribution a step further. By placing the gearbox behind the engine, mass was not just lowered – but more centralised, too. The 312T now manoeuvred as well as it moved. At the start of the \’76 season, the 312T was to win another three back-to-back GPs. But, \’75 had been the car\’s finest hour. Niki Lauda – alongside team-mate Clay Regazzoni – had done the Tifosi proud. The Scuderia Ferrari fanatics had seen their team restored to the upper echelon of world motorsport. So, on top of being one of the most iconic race cars ever built, the 312T was a terrific all-round package. As such – in terms of technology – Ferrari pointed the way to the fully-integrated future of F1.