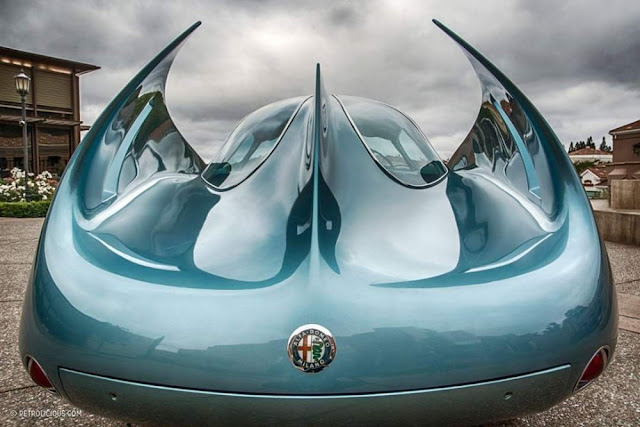 The Alfa Romeo BAT 7 was a concept car out of the house of Bertone – an Italian coach-building firm, par excellence. The BAT 7 was the work of the young Franco Scaglione – a rising star of the Bertone team. It was one of a series of cars he designed – which also included the BAT 5 and BAT 9.

BAT stood for \’Berlinetta Aerodinamica Technica\’. As the name implied, airflow was a key concern. Scaglione\’s goal was to decrease cornering drag – while simultaneously increasing frontal downforce. That tied in with another performance box Scaglioni wanted ticked. That 125mph be extracted from a mere 100bhp engine. All these technical criteria were achieved with flying colours. The BAT 7\’s drag coefficient was 0.19 – a figure a modern-day supercar would struggle to match. And that, from a car built in \’54! Okay, so it helped that the BAT 7 did not come with roadster-style baggage attached. That said, its sibling – the BAT 9 – did put real miles on the clock.

The BAT 7 served only to strengthen the bond between Alfa and Bertone. The latter had designed the bodywork for the Giulietta Sprint GT – now an established product in the Alfa range. The insights gleaned by Bertone from the three BAT cars had been vital in the GT\’s development. Not least, the BAT 7. From its rakish low nose – to the folds of its \’tail-fins\’ – air-pressure did not stand a chance. In time, Bertone\’s lessons in shape-shifting would be learned by other automotive designers. Few of their creations, though, would have the allure of the Alfa Romeo BAT 7. A manta ray on wheels, the BAT 7 took metalwork to a whole new level. Young Italian coachbuilders – take notes!