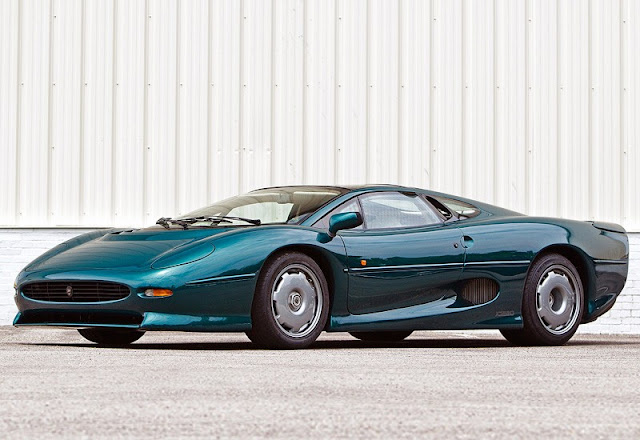 The Jaguar XJ 220\’s parts-list seemed more suited to aerospace than automobiles. The body was made from bonded-aluminium honeycomb. Its aerodynamics came straight out of Group C racing. The result was cerebellum-splitting acceleration. \’220\’ stood for its mph top speed. Jim Randle – Jaguar\’s chief engineer – conceived the car. Thereafter, he coaxed a few colleagues into spending Saturdays on the XJ project. To begin with, at any rate, we are talking spare-time supercar!

The XJ\’s race credentials were clear to see. Keith Helfet\’s svelte bodywork was just for starters. A 5-speed transaxle ran through an AP clutch. Alloy wheels were centre-locking – for speedy wheel changes. Hefty brakes had 4-piston calipers. Suspension was wishbone/inboard. Output was 500bhp. In theory, at least, though, the XJ was a roadster. Jaguar teamed up with TWR – to found JaguarSport. A production facility was built – in Bloxham, Oxfordshire. In total, 350 XJs rolled out of it. Each with a price tag of £403,000.

When the prototype appeared – at the \’88 Birmingham Motor Show – it had triggered a tidal wave of excitement. Jaguar were besieged by orders. But when the supercar bubble burst, panic had set in. Suddenly, lawyers were overloaded with cases – as over-eager buyers tried to wriggle off the car\’s high-priced hook. The Jaguar XJ 220 story – which began in Whitley, West Midlands – morphed into something more suited to Hollywood! What started as a sideline – to keep boffins\’ brains busy – turned into a study in Eighties excess.